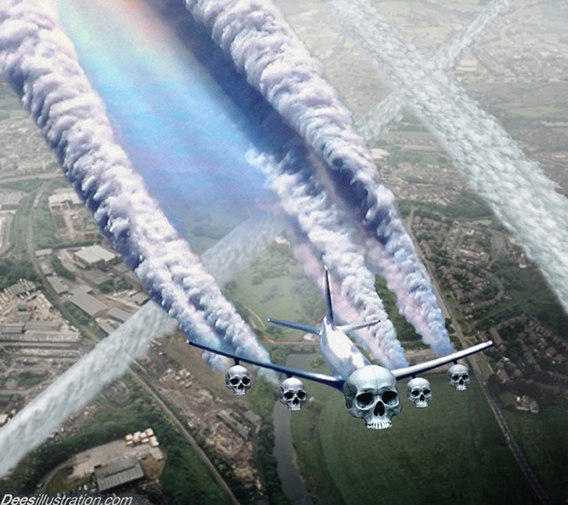 What are Chemtrails and why all the concern?

Ah, Chemtrails. You see them, I see them, the planes responsible for them are clearly visible in a typical day, but according to military and governmental spokespeople, they simply are not there.

Unlike normal condensation trails, these trails do not dissipate after ten minutes or so. Instead, they expand outwards, remaining as huge cloud like projections, often the length of the sky, floating there for hours after their release. Some observers of this issue claim that these chemtrails can consist of laboratory created RNA, aluminium oxide, ethylene dibromide, barium, and other yucky things. Some chemtrails include polymer fibres. If so, they hold a plethora of risk for the humans below, including neurological disturbances, heart problems, breathing problems, etc.

Critics claim that this chemical porridge allows our DNA to be infiltrated and re-arranged, without our consent. So the activity could be acting like a vaccination program without the consent of the population upon whom it is inflicted. Some known side effects of these chemical trails are increased cases of nosebleeds, asthma, allergies, pneumonia, and upper respiratory complaints with flu-like symptoms.

There are now universal discussions, via the Web, of just how the barium salts, dimethyl bromides, etc. are being discharged into the atmosphere by military and civilian aircraft worldwide. Clifford Carnicom, an expert on chemtrails states, “the results of the current research are now sufficient to establish an analytical basis for the formal investigation of radical atmospheric changes induced by the relatively recent aircraft aerosol operations.” Barium and aluminium particles were at one point in our country’s history used for cloud-seeding, a practice that fell into disfavour when it was realized that such particles disrupted human health.