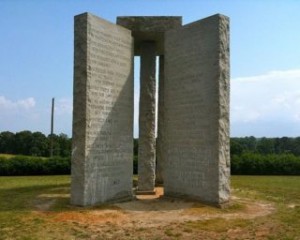 Target: We The People

And they also have one specifically for We the People in America. They are rolling it out progressively in stages. And it is sinister and evil beyond imagination.

The KM has a grandiose final plan to deploy worldwide Disposal Operations targeting all humans, all over the whole world, and involves a progressive mass kill-off (induced mass-murder) to total about 90% of the human race.

This has been carved in stone in the KM’s Georgia Guidestones and various White Papers of their key Foundations and think-tanks.

During the period between 2016 and 2020, the Khazarian Mafia “Select Few” Top Chieftains plan to complete its worldwide kill-off plan. But first the KM believes it must progressively weaken, sicken, and kill off significant numbers of Americans and make as many as possible dependent on the state for basic sustenance.

The KM believes that it is necessary to disempower the American Masses so that they cannot resist in any significant way when the KM deploys its heavy-duty kill off beginning in 2020.

To disempower the American Masses, the KM enacted numerous Free trade Policies beginning with NAFTA and spreading to CAFTA, GATT and WTO, which has resulted in the massive export of most good American manufacturing jobs, leaving the best, high-paying jobs inside the Beltway, and in elected and appointed USG and State Government positions.

And now the KM is pushing hard for additional Free Trade policies like the TPP and TTIP which will export even more American jobs and lower the American standard of living even more.

And in order to weaken and disarm the American Populace the KM has now rolled out evil policies to spread corruption to every level of government including the new DHS, US Department of Justice and all Alphabets.