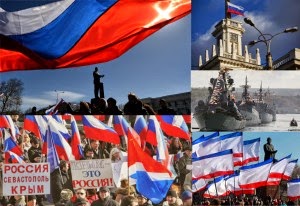 NATO calls Crimea “invaded” and “occupied.” NATO has taught the world well what invasion and occupation really looks like, and Crimea isn’t it.

In 2001, NATO invaded and began the occupation of the South-Central Asian country of Afghanistan. The invasion and occupation has left tens of thousands dead, many more displaced, and has resulted in continued chaos and violence up until and including present day. Throughout the conflict, revelations of abuses, mass murder, and other atrocities including systematic torture have been exposed, perpetrated by invading NATO forces and their Afghan collaborators.

The war has also resulted in the use of armed drone aircraft which regularly kill men, women, and children indiscriminately along the Afghan-Pakistani border – a campaign of mass murder ongoing for nearly as long as the conflict has raged.

In 2003, NATO-members joined the United States in the invasion and subsequent occupation of Iraq. An estimated 1 million people would lose their lives, including thousands of Western troops. For nearly a decade the United State occupied Iraq, and during its attempts to prop up a suitable client regime, laid waste to the nation. American forces in their bid to exercise control over the Iraqi population would conduct sweeping assaults on entire cities. The city of Fallujah would be leveled nearly to the ground, twice.

The US also maintained prison camps across the entire nation. Some vast and spanning, others dark and secret, including the infamous Abu Ghraib prison and the atrocities carried out there. In addition to Western armed forces, a significant number of paid mercenaries participated in both the occupation and the atrocities carried out during it, including the mass killing of civilians resulting in criminal cases still reverberating through Western legal systems and undermining Western credibility worldwide.

This is what real invasions and occupations look like. The armed entrance into a nation, the absolute subjugation of all its people through maximum force – or as the US calls it “shock and awe” – and an occupation by gunpoint with tanks and troops in the streets of a people who do not want them there, and who are willing to fight and die to drive them out.

So when in March of 2014, Crimea was returned to Russia and NATO called the move an “invasion” and “occupation,” the world was reasonably concerned. Some were concerned because they equated the words “invasion” and “occupation” with the levels of mass murder and decimation associated with NATO’s decades of foreign interventions – believing that such violence was now unfolding in Crimea, this time at the hands of the Russians. Others were concerned because of the obvious falsehood within which NATO was framing events in Crimea.