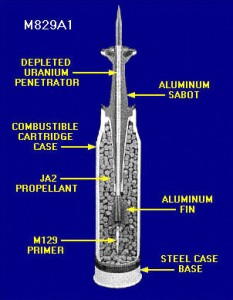 As the U.S. considers another war in Iraq, it is important to reflect on the prior wars there on Independence Day. The war in Iraq cost 4500 American lives and as many as 1.4 million Iraqi civilians have been killed.

In addition to the loss of life in the recent Iraq War, the Persian Gulf War from 1990 – 1991 was the beginning of a nuclear nightmare in Iraq.

According to whistleblower and former U.S. Army Nuclear Physicist, Dr. Doug Rokke, the US used an astonishing 350 tons of depleted uranium (DU) in the Gulf Wars! The solid radioactive materials were dispersed across battlefields in Iraq, Saudi Arabia and Kuwait.

Over 160,000 US troops that participated in the first Gulf War have been classified as disabled due to topical exposure, ingestion and inhalation of DU. The dangerous effects last for eternity.