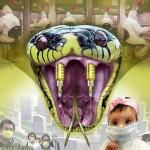 A new report by two Delhi pediatricians suggests that the sharp rise in childhood paralysis in India is due to the increased usage of the oral polio vaccine, a drug that was banned in the U.S. over a decade ago.

Their findings, which were published in the Indian Journal of medical Ethics, revealed that rates of non-polio acute flaccid paralysis (NPAFP) have increased 1200% since the oral polio vaccine was introduced to India a decade ago.

The doctors provided other troubling details in their report: