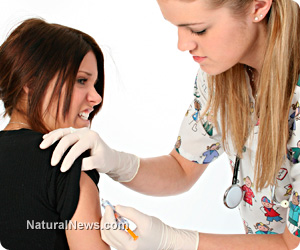 A top physician who used to work for drug giant Merck & Co., creator of the Gardasil vaccine for cervical cancer, has made some groundbreaking public admissions about the dangers and ineffectiveness of this controversial jab. During a recent interview with the French magazine Principes de Sante, Dr. Bernard Dalbergue confessed that Gardasil is a worthless vaccine that not only fails to protect against cervical cancer but also puts individuals at risk of paralysis, encephalitis, Guillain-Barre syndrome and a host of other debilitating ailments.

Suggesting that Gardasil will eventually become recognized as “the greatest medical scandal of all time,” Dr. Dalbergue railed against its approval and continued use, claiming that “everyone” involved with it knows that it’s completely worthless. Dr. Dalbergue also brought up another researcher by the name of Dr. Diane Harper who was involved with both Gardasail and Cervarix, the two approved vaccines for the human papillomavirus (HPV). As we we previously reported, Dr. Harper had previously blown the whistle on the dangers and ineffectiveness of these widely pushed vaccines.

“The full extent of the Gardasil scandal needs to be assessed,” reads an English translation of the interview, which was originally published in French. “[E]veryone knew when this vaccine was released on the American market that it would prove to be worthless! … In addition, decision-makers at all levels are aware of it!”

According to Dr. Dalbergue, industry insiders are fully aware of the fact that Gardasil can cause permanent, life-threatening damage to the central nervous system. They know that the vaccine can leave patients unable to walk, for instance, or function normally without extreme fatigue or pain. They also know that Gardasil does nothing to protect people from cervical cancer, the disease for which it is pushed aggressively on young people, both male and female.

“I predict that Gardasil will become the greatest medical scandal of all times because at some point in time, the evidence will add up to prove that this vaccine, technical and scientific feat that it may be, has absolutely no effect on cervical cancer,” he stated. “[A]ll the very many adverse effects which destroy lives and even kill, serve no other purpose than to generate profit for the manufacturers.”