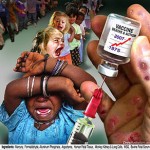 The Bill & Melinda Gates Foundation-backed group Global Alliance for Vaccines and Immunizations (GAVI) is on a mission to forcibly vaccinate every single child on the planet against every single known “preventable disease.” And the group’s CEO, Seth Berkley, believes he can actually make this happen with enough cash, political force, and distribution systems in place.

Cloaked in a veil of humanitarianism, GAVI’s vaccination agenda has been spreading across the globe like a virus, as hundreds of millions of children around the world have already been vaccinated, and many more are on the way. But the group’s vaccination push will not stop until every child in the world is vaccinated, even if it means having to use force.

This is what happened, after all, in Malawi back in 2011, where Malawian children were vaccinated at gunpoint. Reports at the time indicated that parents of unvaccinated children that had tried to escape a local vaccination mandate were tracked down and apprehended, and their children forced to receive the jabs as part of the United Nations‘ Millennium Development Goals.

None of this would have been possible, however, had GAVI been allowed to crumble back in 2010 when it was suffering severe financial problems. But former Microsoft CEO Bill Gates came in and saved the day, according to Reuters, by working together with GAVI and the British government to coerce much needed funding, to the tune of $4.3 billion, out of donors.

And this is hardly a surprise, since Bill Gates himself has been on a personal mission to vaccinate the entire world as well. At a 2011 GAVI conference, Gates explained to attendees how the world needs “vaccine equity,” which he later defined as vaccinating everybody on earth.

“It’s now that we’re gonna start to get the last two vaccines that rich kids take for granted, the pneumococcal and rotavirus, and over these next five years, get them out to every child everywhere,” said Gates at that time. “That means for the first time ever that we have equity in vaccines.”

So there you have it, folks. One of the world’s richest men, in partnership with a multi-billion dollar public-private partnership and several powerful world governments, is actively working towards a 100 percent vaccination rate among the world’s children. Are you prepared to stand up to this jackbooted medical mafia when they come for your children?