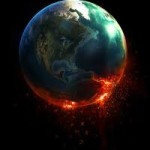 “The world faces a dangerous convergence of environmental and resource crises, not all directly climate related. All, however, are increasingly difficult to resolve in a rapidly warming world. Taken together, they are not amenable to a business-as-usual political response. Here, in no particular order, are six:

1. Population Pressure: Sir David Attenborough has witnessed how the natural world is being crushed by humanity. “I’ve never seen a problem that wouldn’t be easier to solve with fewer people, or harder-and ultimately impossible-with more,” he says. The Earth must provide for around 80 million more people than this time last year. It took us almost 10,000 years to reach a billion people. We now add that many every 12-15 years.

2. Biodiversity: “The world is currently undergoing a very rapid loss of biodiversity comparable with the great mass extinction events that have previously occurred only five or six times in the Earth’s history,” says the World Wildlife Fund. It has tracked an astonishing 30% decline in the Earth’s biodiversity between 1970-2003. Overpopulation, hunting, habitat destruction, deforestation, pollution and the spread of agriculture are leading to as many as 1,000 entire species going extinct every week-that’s a species every 10 minutes. The economic cost of destroying biodiversity is also immense. A 2008 EU study estimated the cost of forest loss alone is running at $2-$5 trillion (¤1.3-¤3.4 trillion) annually.

3. Ocean Acidification: The evidence of the effects of increased CO2 levels on the world’s oceans is unequivocal. Surface ocean acidity has increased by 30% since 1800, with half this increase occurring in just the last three decades. The rate of change in oceanic pH levels is around 100 times faster than any observed natural rate. Increasing acidity is impeding the ability of plankton called foraminifera to produce shells. These creatures form the base of the entire marine food system. The world’s vital reef systems are also in peril from acidification.

4. Peak Oil: This month, the International Energy Agency formally predicted global peak oil by 2020. [Some industry analysts think it has already occurred.] Today, the world burns the equivalent of 82 million barrels of oil every day. Projected growth in energy demand will see this rise to almost 100 million barrels within a decade, but by then, output from the oilfields currently in production will have plummeted to barely a third of that. A massive energy gap is looming, and with discoveries having peaked in the mid-1960s, we are approaching the bottom of the cheap oil barrel. Non-conventional oil, renewables and nuclear will be nowhere near capable of bridging this energy gap in time. The oil shocks of the coming decade will be intense.

5. Peak Food: The global food system is predicated on plenty of cheap oil, fresh water, soil and natural gas. All four are in decline. The food riots of 2008 were an early warning of a global system in crisis. In the US, it is estimated every calorie of food energy requires 10 calories of fossil fuel energy. More food production is now being channeled into fattening animals. Meat is a tasty but entirely inefficient way to use finite food resources. Meanwhile, the UN predicts the collapse of all global commercial marine fisheries by 2048, depriving up to two billion people of food.

6. Peak Water: During the 20th century, human water usage increased nine-fold, with irrigation (for agriculture) alone using two-thirds of this total. With almost all major glaciers retreating, many river systems are at risk. Groundwater in aquifers is another key fresh water source. Over-extraction, mostly for agriculture, has caused their levels worldwide to plummet. Pollution, especially from fertilizer overuse, adds to the loss of fresh water. The [Irish] Environmental Protection Agency yesterday reported only 17% of Ireland’s rivers are of “high ecological status”.

“The 19th century naturalist John Muir famously wrote that “when one tugs at a single thing in nature, he finds it attached to the rest of the world”. As the Copenhagen conference draws to a close, the words of a contemporary of Muir, politician and orator Robert Ingersoll, have never seemed more apt: “In nature there are neither rewards nor punishments; there are only consequences.””