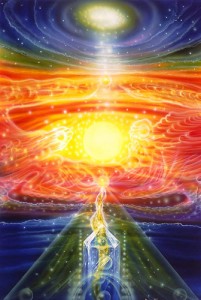 No More Secrets, No More Lies by Patricia Cori (Channel for the Sirian Council)
www.sirianrevelations.net

One World Order (Chapter Seven)
The One World Order – where the secrets and lies of those who have forever manipulated the human race are coming into full light – is upon you. We believe that this is becoming abundantly clear not only to those of you who lie directly in its path, but to all who are even minimally aware of the tidal wave rushing over humanity … for the greatest storm of earth history is rising just beyond the confines of their locked doors and rose-covered garden walls.
All of you, in varying measure, will know its power and through its dual nature – destructive and oppressive as it is cleansing and liberating – you will exercise your free will in determining just how you intend to weather the hurricane.

As frightening or disempowering as current world events may appear to you, remember that the all-out, belligerent attempt to take over Planet Earth is actually a much-needed catalyst that provides a majority of human beings a great opportunity to shake off the drug of indifference and stand for themselves and the greater society. Through their omniscient administration of the people of your world and their design to control every resource, those in power are openly obstructing liberty and blatantly defiling the planet. You simply can no longer pretend or be fooled into embracing the illusions of righteousness that they have projected into your fields of vision.

Great numbers of you are now seeing through the smokescreen and that is a most positive aspect of this difficult time in your social evolution. And so we ask you to give great consideration and due contemplation to how the dark force, is, in a very important sense,
imploring you … for their tightening of the reins only stirs your desire and determination to run forever free – towards the light. That, children, is Justice in its purest sense.

It is a most exquisite example of how light prevails. Let it serve as a lantern when the night of the Desert Days casts your mind into the shadow land that lies just over there – in the dark fields through which your star-lit path unwinds.

The architecture of their omnipotent design is crumbling and so the pillars of power are wavering, soon to come down with a vengeance, as foreshadowed by the World Towers debacle. That cataclysmic event, the opening of the 9 -11 portal, served as the trigger for the initiation of all those who will either be ascending with Earth or going on to serve as lightworkers at their next station in the physical realm. So open your eyes, lightworkers all, to see opportunity rising from the dust and despair of destruction, and observe the outpouring of light.

In truth, you have seen this coming. You have contributed to it in countless ways: as working members of your throw-away societies and as ‘drop outs’; as conscientious ecologists and as mindless consumers of earth’s resources; as thinking, concerned citizens of your troubled world and as oblivious passers-by. And so, we invite you not to gasp in despair at the magnitude of what appears to be overtaking your race, or bury your heads in that hopelessness that has (momentarily) consumed so many souls on your planet, but rather to turn your acute attention to how this global tyranny is being imposed upon you, just what you can and what you intend to do about it.