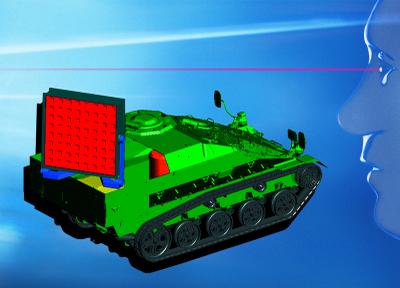 The U.S. military bankrolled early development of a non-lethal microwave weapon that creates sound inside your head. But in the end, the gadget may be just as likely to wind up in shopping malls as on battlefields, as I report in New Scientist.

The project is known as MEDUSA – a contrived acronym for Mob Excess Deterrent Using Silent Audio. And it should not be confused with the Long Range Acoustic Device and similar gadgets which simply project sound. This one uses the so-called “microwave auditory effect”: a beam of microwaves is turned into sound by the interaction with your head. Nobody else can hear it unless they are in the beam as well.

The effect has long been a laboratory curiosity, with no application. But, over the years, the military has been intrigued. The idea (dubbed “the telepathic ray gun”) was mentioned in a 1998 US Army study, which turned up in a recent Freedom of Information Act document dump. Five years later, the Navy decided to put some R&D dollars into the project. Now, as I note on the New Scientist website, Dr. Lev Sadovnik of the Sierra Nevada Corporation has provided more details.

There are health risks, he notes. But the biggest issue from the microwave weapon is not the radiation. It’s the risk of brain damage from the high-intensity shock-wave created by the microwave pulse. Clearly, much more research is needed on this effect at the sort of power levels that Dr. Sadovnik is proposing. But if it does prove hazardous, that does not mean an end to weapons research in this area: a device that delivered a lethal shock-wave inside the target’s skull might make an effective death ray.

Dr. Sadovnik also makes the intriguing suggestion that, instead of being used at high power to create an intolerable noise, it might be used at low power to produce a whisper that was too quiet to perceive consciously but might be able to subconsciously influence someone. The directional beam could be used for targeted messages, such as in-store promotions. Sadovnik even suggests subliminal advertising, beaming information that is not consciously heard (a notion also spotted on the US Army’s voice-to-skull page). While the effectiveness of subliminal persuasion is dubious, I can see there might be some organizations interested in this capability. And if that doesn’t work, you could always point the thing at birds. They seem to be highly sensitive to microwave audio, so it might be used to scare flocks away from wind farms — or shoo pigeons from city streets.