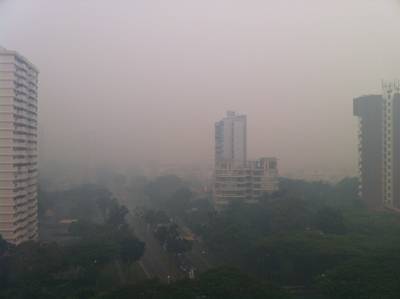 I’ve often wondered how the media would respond when eco-apocalypse struck. I pictured the news programmes producing brief, sensational reports, while failing to explain why it was happening or how it might be stopped. Then they would ask their financial correspondents how the disaster affected share prices, before turning to the sport. As you can probably tell, I don’t have an ocean of faith in the industry for which I work. What I did not expect was that they would ignore it.

A great tract of Earth is on fire. It looks as you might imagine hell to be. The air has turned ochre: visibility in some cities has been reduced to 30 metres. Children are being prepared for evacuation in warships; already some have choked to death. Species are going up in smoke at an untold rate. It is almost certainly the greatest environmental disaster of the 21st century – so far.

And the media? It’s talking about the dress the Duchess of Cambridge wore to the James Bond premiere, Donald Trump’s idiocy du jour and who got eliminated from the Halloween episode of Dancing with the Stars. The great debate of the week, dominating the news across much of the world? Sausages: are they really so bad for your health?

What I’m discussing is a barbecue on a different scale. Fire is raging across the 5,000km length of Indonesia. It is surely, on any objective assessment, more important than anything else taking place today. And it shouldn’t require a columnist, writing in the middle of a newspaper, to say so. It should be on everyone’s front page. It is hard to convey the scale of this inferno, but here’s a comparison that might help: it is currently producing more carbon dioxide than the US economy. And in three weeks the fires have released more CO2 than the annual emissions of Germany.

But that doesn’t really capture it. This catastrophe cannot be measured only in parts per million. The fires are destroying treasures as precious and irreplaceable as the archaeological remains being levelled by Isis. Orangutans, clouded leopards, sun bears, gibbons, the Sumatran rhinoceros and Sumatran tiger, these are among the threatened species being driven from much of their range by the flames. But there are thousands, perhaps millions, more.

One of the burning provinces is West Papua, a nation that has been illegally occupied by Indonesia since 1963. I spent six months there when I was 24, investigating some of the factors that have led to this disaster. At the time it was a wonderland, rich with endemic species in every swamp and valley. Who knows how many of those have vanished in the past few weeks? This week I have pored and wept over photos of places I loved that have now been reduced to ash.

Nor do the greenhouse gas emissions capture the impact on the people of these lands. After the last great conflagration, in 1997, there was a missing cohort in Indonesia of 15,000 children under the age of three, attributed to air pollution. This, it seems, is worse. The surgical masks being distributed across the nation will do almost nothing to protect those living in a sunless smog. Members of parliament in Kalimantan (Indonesian Borneo) have had to wear face masks during debates. The chamber is so foggy that they must have difficulty recognising one another.

It’s not just the trees that are burning. It is the land itself. Much of the forest sits on great domes of peat. When the fires penetrate the earth, they smoulder for weeks, sometimes months, releasing clouds of methane, carbon monoxide, ozone and exotic gases such as ammonium cyanide. The plumes extend for hundreds of miles, causing diplomatic conflicts with neighbouring countries.