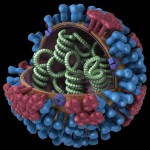 Should scientists be allowed to create extremely aggressive and highly infectious influenza viruses? Dutch virologists have done it and, in the process, triggered a fierce debate over the risks of bioterrorism and the potential release of deadly viruses.

In his work, Ron Fouchier, a virologist, uses the methods of a branch of research that is as booming as it is controversial. Synthetic biology employs targeted manipulation through genetic engineering to construct new organisms. The 45-year-old’s research has even set off alarm bells at the World Health Organization (WHO). This week, Fouchier will appear before an international panel of experts at the WHO to explain his experiments.  He has created a new organism. And although it is tiny, if it escaped from his laboratory it would claim far more human lives than an exploding nuclear power plant.

The pathogen is a new mutation of the feared bird flu virus, H5N1. In nature, this virus, which kills one of every two people infected, has not yet been transmitted from humans to humans. So far, a relatively small number of people have caught the virus from poultry, and 336 people have died.

For years, experts feared that the adaptable virus could soon mutate from being primarily a bird killer to a highly infectious threat to humans. Fouchier’s experiments have given the research community a wake-up call. The scientist performed only a few targeted manipulations on the genetic material of the ordinary H5N1 virus and, to make the virus even more dangerous, he repeatedly transmitted it from one laboratory animal to the next. “In the end, the virus became airborne,” the Dutch scientist explains.

Many scientists are particularly impressed by the fact that, at almost the same time, another research team also managed to produce an avianflu virus/swine flu virus that could be transmitted via airborne respiratory droplets. The newly created superbug is highly infectious. Hundreds of new virus laboratories have been established worldwide in recent years, and highly dangerous pathogens are used in a large share of these laboratories.

Fouchier wants to send his pathogen to other labs around the world. “We are at the very beginning, and we need as many scientists and their ideas as possible, so that we can understand why this new virus is so contagious,” he says.