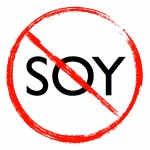 Soy was never meant for human consumption. What’s wrong with soy? It contains three potent estrogens (isoflavones), hemaggluttin, clot-promoting toxin, phytates which inhibit the absorption of important minerals (calcium, zinc and magnesium), trypsin (enzyme) inhibitors, an unidentified protein called “soyatoxin” and the protein of soy is very poor and largely unusable due to processing. Soymilk contains 100 times more aluminum than breast or cow milk and can cause permanent genitalia defect in babies. Giving and infant soymilk is like giving him or her five birth control pills a day.