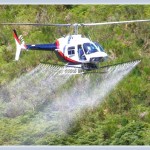 Dallas County, Texas, and several nearby towns and cities in the Dallas area are currently being forcibly sprayed with toxic insecticides as part of a government effort to supposedly eradicate mosquitoes that may be carriers of West Nile virus (WNv). The mass sprayings, which are ramping up all across the country, involve blanketing entire areas with chemicals sprayed via airplanes, a highly controversial protocol that threatens not only all other insects and animals exposed, but also humans.

Aerial spraying these chemicals has been linked to causing Colony Collapse Disorder in bees.