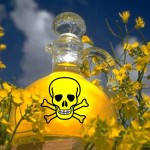 Many healthy and natural products in your local health food store may indeed contain canola as a main ingredient. Everything from sauces to dressings to soups now tend to include canola oil, while espousing natural health claims. The question is how healthy is Canola oil, or rather, what is it even?

There was no canola plant before 1974. It didn’t exist in nature, despite millions of years of evolution. To be fair, there is really no such thing as a Canola plant today either, rather, its a Rapeseed plant. The Rapeseed plant did not have a good reputation, indeed to the contrary, it was and is considered quite poisonous to humans and animals. Rapeseed oils are comprised of 55% Erucic acid, which is a very toxic acid (studies have linked to heart problems, lung cancer etc,), and Canola is a Rapeseed plant that has been bred so it produces about 1% erucic acid. Canola was man-made by scientists at a University laboratory in Canada, so that the genes in the plant were now bred to produce less of the toxic erucic acid that Rapeseed naturally produces. Another name for Canola is LEAR meaning “Low Erucic Acid Rapeseed.” You can read more in depth about it from the National Canola Growers Association, as even they admit that what they grow is just a “genetic variation of rapeseed” developed by “Dr. Baldur Stefansson, a University of Manitoba” scientist.
http://www.greencradle.net/2011/02/wondering-about-canola-oil/