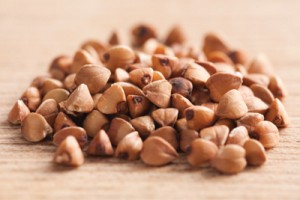 Most health conscious people don’t think of waffles and pancakes when they think of breakfast, but it turns out that both foods are highly nutritious and health promoting if the right ingredients are used. A recent study from a team of researchers in Madrid, Spain has highlighted the healthy aspects of hearty buckwheat and the flour made from it. Indulging in a stack of buckwheat pancakes or waffles will provide vitamins, minerals, amino acids, and prebiotics that create health and happiness.

Researchers at the University of Madrid fed rats a buckwheat rich diet for ten days. An additional group of ten rats were fed the same diet, but without buckwheat. At the end of the trial period, the intestines of the rats were analyzed and compared. The researchers found that rats receiving buckwheat had a significantly greater amount of friendly bacteria in their digestive tracts than did those in the control group. They also had three additional types of beneficial bacteria that were not present in the controls.

Why are intestinal bacteria so important? Friendly bacteria inhabit the digestive tract in massive numbers, crowding out harmful bacteria and proving protection against food borne and other illnesses. They assist with digestion and free valuable nutrients such as some of the B vitamins, omega-3 fatty acids, digestive enzymes such as lactase, and immune system constituents that seek out and destroy cancer cells. 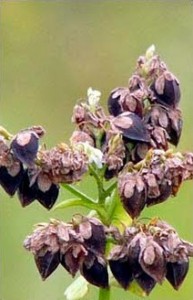 This critical ecosystem of the digestive tract is fragile and easily disturbed. Antibiotics can completely kill off all friendly bacteria. Steroid drugs like cortisone or prednisone, birth control pills, and chemotherapy can destroy the balance of friendly bacteria leaving room for unfriendly bacteria to flourish. Poor nutrition, chlorinated water, and conventionally produced foods that contain pesticides also create havoc in the friendly bacteria population and place health in jeopardy. All these reasons make it extremely important to eat foods that encourage the growth of friendly intestinal bacteria.

Although many people think of buckwheat as being a grain, it is actually a fruit seed related to rhubarb and sorrel. Buckwheat flowers are highly fragrant, making them attractive to bees which use them to produce dark, richly flavored honey. Buckwheat has been grown in American since colonial days, and was once a common food on tables in the northeast and north central U.S. before being replaced by nutrient poor processed white flour primarily from wheat.

Although buckwheat has the look, feel, taste, and versatility of grain, buckwheat is not technically grain, and it contains no gluten. What it does contain is a full spectrum of essential amino acids, making it one of the few vegetarian sources of complete protein that equals the protein of fish or meat in quality. 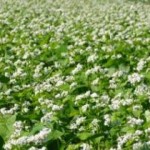 Buckwheat has a nutty, rich flavor that complements many dishes. Its versatility allows it to replace meat in many recipes. Pure buckwheat flour can replace processed white flour almost across the board.