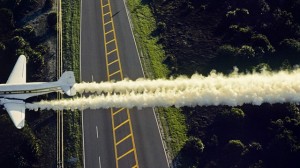 As fear of the Zika virus spreads throughout the United States, authorities are desperately looking for ways to protect their citizens. As reported by Circa, over 1,000 people in the U.S. have been infected with the Zika virus, which is believed to cause severe birth defects like microcephaly.

One of the primary weapons to kill the disease-carrying mosquitoes is the use of aerial pesticides – chemicals that are sprayed from airplanes and helicopters. While the number of states using aerial spraying or fogging campaigns to kill off mosquitoes is rising, some scientists are raising serious questions about their safety.

One of the chemicals being used is an Environmental Protection Agency (EPA) approved insecticide called Naled. Naled is a neurotoxin that kills adult mosquitoes. While this compound will provide protection against the Zika virus, there are several huge problems linked to its use.

In addition to killing important pollinators such as bees and butterflies, scientists found that high exposure to commonly used chemicals such as pyrethroids and the organophosphate trichlorfon could have severe negative long-term health effects. Trichlorfon, one of the main ingredients in Naled, has been associated with an increased risk of cancer, autism and birth defects.

A 2014 study conducted at the University of California, showed that pregnant women living within a few miles of farms where pesticides like Naled were sprayed had a 60 percent increased risk of their child developing autism spectrum disorders or experiencing developmental delays.

Dr. David Perlmutter, a board-certified neurologist, said that authorities need to take a step back and look at the broader picture of these spraying interventions when weighing up risk versus benefit.

“We should prove safety and not just say well because it hasn’t been proven detrimental it’s ok. That’s not good enough,” he said.

Besides causing autism, substances like pyrethroids have been linked to breathing problems, involuntary twitching, seizures and cancer. The EPA has even classified them as likely to be carcinogenic to humans. Nonetheless, pesticides containing pyrethroids or trichlorfon are being used in Zika response plans in many U.S. cities.