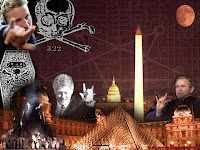 Many within the global elite are sexual predators that target children. On the morning of June 29, 1989 ‘Homosexual Prostitution Probe Ensnares Official of Bush, Reagan,’ screamed the front-page headline of the Washington Times with the kicker ‘Call Boys Took Midnight Tour of White House.’ The Times reported, ‘A homosexual prostitution ring is under investigation by federal and District authorities and includes among its clients key officials of the Reagan and Bush administrations, military officers, congressional aides and U.S. and foreign businessmen with close ties to Washington’s political elite.’

As publicized by Congresswoman Cynthia McKinney, in the late 1990s, DynCorp whistleblower Ben Johnston stated that supervisors engaged in sex with 12- to 15-year-old children, and sold them to each other as slaves. Ben Johnston ended up fired, and later forced into protective custody. According to Johnston, girls were kidnapped by DynCorp employees from Russia, Romania and other places.  Another DynCorp whistleblower, Kathryn Bolkovac, demonstrated that DynCorp had a $15 million contract to hire and train police officers for duty in Bosnia and Herzegovina.  The officers were paying for prostitutes and participating in sex trafficking. Additionally, one of the US embassy cables released by WikiLeaks said that DynCorp workers who were employed to train Afghan policemen took drugs and paid for young ‘dancing boys’ (child prostitutes) to entertain them.
Like former FBI agent Ted Gunderson, former Georgia senator Nancy Schaefer investigated crimes, abuse, and kidnapping within Georgia’s child protective services.  She found that ‘Child Protective Services nationwide has become corrupt and that the entire system is broken almost beyond repair. I am convinced parents and families should be warned of the dangers.’ For her efforts to protect children, Nancy and her husband were ‘suicided,’ much like DC Madam Deborah Jeane Palfrey who provided escorts to U.S. senators.
The Franklin Cover-Up, involved government drug smuggling, money laundering, child kidnapping and recruiting boys from orphanages in the Midwest for sex with U.S. Congressmen.  Ted Gunderson also gave speeches exposing the CIA and international child trafficking.

Recently another elitist pedophile ring has been exposed with the bust of 44-year-old mother of four Anna Gristina, charged with running a prostitution ring out of a New York apartment that relied on police protection to provide wealthy clients with minors for sexual encounters.

Until recently, Goldman Sachs owned a 16 percent stake in Village Voice media, which owns Backpage.com, possibly the largest forum for sex trafficking of under-age girls in the United States. Backpage has 70% of the market for prostitution ads, according to AIM Group, a trade organization.  When a journalist reported this information, Goldman Sachs frantically unloaded its shares.