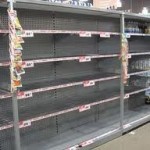 Here we go, not only have we to pay for water contaminated with the toxic chemical fluoride, now we’ve to get used to rationing according to the top ‘climate change’ expert and global warming mouthpiece, John Sweeny. “This is a problem that is going to become more common in years to come. We cannot label one dry summer as climate change. But it is the kind of drier summer we can expect in years to come” he said.

I won’t even bother to give this moron the title ‘professor’ because quite frankly, any idiot who believes that man is causing the climate to change by breathing, despite all the evidence showing nothing of the kind, then to be honest, this fool should be psychiatrically examined to see if he has any modicum of intelligence at all before he’s let loose to indoctrinate children with this utter nonsense of manmade global warming.

How quickly ‘climategate’ and all the other exposed lies and fraud of the ‘climate change’ lobby are forgotten. How quickly they try to sweep the coldest winter in 50 years under the climate change carpet. Instead they keep up the mantra that we must get used to warmer drier summers.

Well, bring it on is all I can say! History shows that warmer weather leads to a world of abundance of food which could, in the right hands, help the poorest in society, particularly those in the Third World to develop their countries to Western Standards. Isn’t that what we should all hope and wish for so that our fellow human beings can simply survive instead of dying of starvation when even today it’s unnecessary and only brought about by corruption and despotism funded by the West, including us folks?

We’ve had warmer summers in the past and we’ll have them in the future in the same way as we’ve had wetter summers in the past and will also have in the future. This is the natural weather cycle of the planet. It has nothing whatsoever to do with CO2 and I openly challenge anyone to show me the evidence to the contrary, including Gormley and Sweeny who continually show their utter ignorance of scientific facts and continue to promote their own fantasy fiction of manmade global warming to the gullible and quite frankly, brainwashed masses.

But getting back to water rationing for a second. Apparently, all of a sudden, at a time when the green lunatics of Gormley and his cabal, who virtually nobody voted for, want to charge us for poisoned water, in one of, if not the wettest country in Europe, hey presto, we have water shortages.

Are the general public, so dumbed down by the fluoride in the water that has been proven to lower IQ’s in children and cause bone cancer amongst other fatal conditions that they can’t see through this blatant propaganda? Are they so stupid to still accept the advice of Sweeny and his cronies who are still pushing the pseudo science of CO2 causing the warming of the planet as fact? If they are, then I’m afraid they deserve every draconian totalitarian piece of legislation coming their way.

Can’t people see that this is simply the start of water rationing whether we have floods, drought or famine? This is part of the real ‘green agenda’ whereby everything will be rationed, not just water, but food as well.

We are in a war scenario folks and the war is on us, the ordinary human beings who inhabit this beautiful planet. It’s being perpetrated on us by a group of psychopathic lunatics who use fanatics like Communist educated John Gormley and his cabal, to push this agenda which is nothing short of EUGENICS.

Read the quote below VERY CAREFULLY. It is in plain English and very easy to understand.

“The common enemy of humanity is man.
In searching for a new enemy to unite us, we came up
with the idea that pollution, the threat of global warming,
water shortages, famine and the like would fit the bill. All these
dangers are caused by human intervention, and it is only through
changed attitudes and behaviour that they can be overcome.
The real enemy then, is humanity itself.”
– Club of Rome,
Premier Environmental Think-Tank,
Consultants to The United Nations.

This group of fanatics, including Al Gore who is a long time member, as they say themselves, are the PREMIER think-tank to the United Nations which is simply another UNELECTED globalist EUGENICS organisation and a precursor to a TOTALITARIAN WORLD GOVERNMENT in the mode of SOVIET RUSSIA or COMMUNIST CHINA!

Look at the quote carefully. It states that in plain English, that this group;

“…came up with the idea that pollution, the threat of global warming,
water shortages, famine and the like would fit the bill.”

What is there that’s difficult to understand about this sentence? They made the whole thing up folks to bring about a war scenario against humanity because they are only interested in reducing the world’s population by any means possible.

Using the “threat of global warming” they are bringing in draconian environmental laws such as global carbon taxes which we’re already paying in this country despite there being, and I repeat, no evidence of any link whatsoever between CO2 and global warming on the scale proclaimed by morons like Gormley and Sweeny. What about “water shortages”? Is this ringing a bell yet? What about “famine”? I wonder how long it’ll be before we start hearing the ‘food shortage’ drums beating? It’s coming folks unless you wake up and realise that, as they state in the quote above, “The real enemy then is HUMANITY itself”.

In case you’ve forgotten, you are humanity itself! Why would we want ‘anti-humanitarians’ at the United Nations controlling humanity? Seems like a dangerous thing to crave for doesn’t it?

Anyone who thinks that slaughterers like Hitler, Stalin, Mao, Polpot etc were rogue fanatics who just wanted to kill alot of people need to study history a little more. If you do you’ll find that the ideas of these psychopaths were given to them by the establishment in London and New York well before World War II.

The real maniacs and future mass murderers are in our midst today camouflaging themselves in a green flag and environmental rhetoric and have been placed in positions of power, not by voters, but by the powerful vested interests who really do run the world, namely the banking families and in particular the Rockefeller family who have been promoting EUGENICS for over a century, including the funding of Hitler’s Eugenics programs, many Eugenics Societies which they still fund to this day.

Bill Gates, whose father worked for the Rockefeller family, is advocating, live on camera that vaccinations can be used to reduce population by 15%. That would be a good start according to him. He’s also promoting GMO foods, another project of the Rockefeller family’s EUGENICS program, which have been PROOVEN to damage human health in a variety of ways including sterilisation similar to the effects of vaccinations.

Why do you think Bill Gates of Microsoft has been allowed to monopolise the world of computer technology? In my opinion he has a debt to pay to the Rockefeller family for his fame and fortune.

Henry Kissinger, another Rockefeller lackey, wrote NSSM 200 when he was Vice President under Richard Nixon, where he laid out the plan to control the world’s food supply through large agribusiness corporations, such as Monsanto and the other GMO companies, by having the world’s supply of staple foodstuffs like corn, wheat etc in the hands of these corporations, who are themselves owned by the elite EUGENICISTS, whereby they would ration this out to countries on the basis of ever decreasing populations in those countries. If countries didn’t reduce their populations, by ANY means possible, including mass murder, then they would be starved to death regardless.

This will, I’m sure, seem far-fetched to many readers but I assure this is coming unless we stand up and stop the rot where it is starting.

Water rationing sound-bites are only the beginning of a concerted effort to convince the people that rationing is to be the new ‘norm’. This will inevitably expand to food, energy, money and every other basic human need. We are HUMAN BEINGS being treated like DUMB ANIMALS.

When are we going to stand up for ourselves and stop listening to pseudo scientific lunatics like Sweeny and imbecilic morons like Gormley and his green Communist cronies who basically lie through their teeth every time they open their mouths.

These people are working for a criminal cabal whose sole objective is to ELIMINATE every one of us through, as they state in the quote above, “water shortages and famine”.

This is for real folks. These lunatics are already ruling the asylum. Unfortunately the asylum is full of brainwashed people who can’t even seem to draw back the curtains of lies, look through the window and see the clear light of truth shining bright on our beautiful planet.

Wake up folks, the war against you started a long time ago and we’re losing