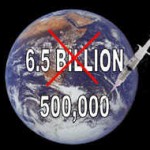 Eugenicists have successfully developed a “birth-control pill” for men. Calling the drug JQ1, this chemical cocktail stunts sperm production in mice. According to a newly published study , researchers are calling this discovery an “efficacious strategy for a male contraceptive.”

By blocking the proteins essential for sperm production and drastically lowering sperm counts, JQ1 is now being slated for human trials.

JQ1 is a molecule that is so small it can travel through blood barriers and impede the male body’s ability to produce sperm. While trials in mice showed that they became infertile, their sexual drive was not affected.

Dr. Martin Matzuk , professor of molecular biology, molecular and human genetics, and pharmacology at Baylor College of Medicine (BCM), maintains that: “If you stop the drug, there’s complete reversibility.”

The BCM has a long history of working to expanding the eugenics agenda with the use of genetic technologies; including collaboration with the German Nazis and their march toward using genetics to create a “better human race”. By looking for “justice as fairness” with the ethical practice of genetics and eugenics concerning applied science and social constructs. The advantage of eugenics ideology in genetic technology is viewed as “the greatest benefit of individuals with the least advantages.” And so by subverting the fact of eugenics in genetic advances will alleviate prejudice and make sure that the eugenics agenda is devoid of negative perceptions so that the genetically disadvantaged could be touted as the beneficiaries of eugenic applications in genetic technologies.

The MRC is a corporation based out of the UK which is governed by executives that control scientific research through oversight and encourage findings of the MRC be applied in the public scientific industry.

The University of Edinburgh is where the study to locate the gene to render men infertile was conducted. They are a supporter of the Centre for Population Change (CPC). The CPC is a small independent research group that focuses on “fertility and family formation” and the socio-implications of population on communities in the UK. This “research group” is simply a front for modern-day Eugenics studies.