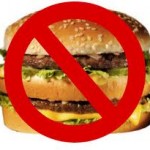 Nearly 80 percent of ground beef mince in markets is contaminated with disease-causing microbes. The primary source of these bugs is feces. A study conducted by the University of Arizona found there are more fecal bacteria in the average kitchen sink than in the average toilet bowl. This would make eating your food on the toilet seat safer than eating it in the kitchen. The source of this biohazard at home is the meat you buy at the typical grocery store.

The new mutant bugs found in today’s meat are extremely deadly. For you to come down with Salmonella poisoning, you have to consume at least a million of these germs. But to become infected with one of the new mutant bugs, you need to ingest a measly five of them. In other words, a tiny particle of uncooked hamburger, making it from a kitchen utensil to your plate, is enough to kill you. Scientists have now identified more than a dozen food-borne pathogens with such deadly effects. The Center for Disease Control admits that they don`t even know the bugs behind most food-related illnesses and deaths.
Movie: Fast Food Nation – 2006

This movie reveals the truth about how contaminated the foods are that are used in the fast foods industry.