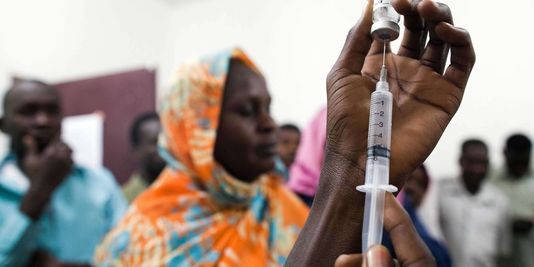 The Kenya Catholic Doctors Association had six tetanus vaccinations from around Kenya tested, and 100% of them tested positive for the HCG antigen.

The Kenya Catholic Doctors Association is charging UNICEF and WHO with sterilizing millions of girls and women under cover of an anti-tetanus vaccination program sponsored by the Kenyan government.

While the government claims the tetanus vaccine is perfectly safe, the Kenya Catholic Doctors Association disagrees.

What they found is disturbing: All six samples tested positive for the HCG antigen which is commonly used in anti-fertility vaccines. The HCG antigen was found in tetanus vaccines targeted to young girls and women of childbearing age.

This proved right our worst fears; that this WHO campaign is not about eradicating neonatal tetanus but a well-coordinated forceful population control mass sterilization exercise using a proven fertility regulating vaccine. This evidence was presented to the Ministry of Health before the third round of immunization but was ignored.

Dr. Ngare listed a number of concerns to do with the mass tetanus vaccination program in Kenya that caused Catholic doctors to become suspicious:

Dr. Ngare told LifeSiteNews that several things alerted doctors in the Church’s far-flung medical system of 54 hospitals, 83 health centres, and 17 medical and nursing schools to the possibility the anti-tetanus campaign was secretly an anti-fertility campaign.

Why, they ask does it involve an unprecedented five shots (or “jabs” as they are known, in Kenya) over more than two years and why is it applied only to women of childbearing years, and why is it being conducted without the usual fanfare of government publicity?

“Usually we give a series three shots over two to three years, we give it anyone who comes into the clinic with an open wound, men, women or children.” said Dr. Ngare.

But it is the five vaccination regime that is most alarming. “The only time tetanus vaccine has been given in five doses is when it is used as a carrier in fertility regulating vaccines laced with the pregnancy hormone, Human Chorionic Gonadotropin (HCG) developed by WHO in 1992.”

It is important to note that there is no financial incentive for the Kenyan government to participate in the vaccination programs, for UNICEF and WHO distribute the vaccines for free.

“When funds from the UN are not enough to purchase yearly allotments of vaccines, an organization started and funded by the Bill and Melinda Gates Foundation, GAVI, provides extra funding for many of these vaccination programs in poor countries,” reports HealthImpactNews.

When disasters happen in poorer countries, UNICEF one of the first relief organizations to begin mass vaccination programs.

Interestingly, there was no tetanus outbreak in Kenya – yet. The only perceived “threat” of tetanus was due to local flood conditions.

Like flu shot vaccines, there is a lot of debate on the necessity and safety of vaccinations. The findings by the Kenyan doctors, however, is certainly worth considering.