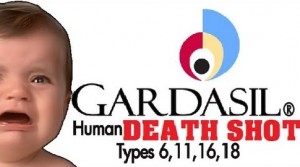 In September 2011, SaneVax Inc. informed the FDA that despite all Merck’s statements claiming Gardasil contained ‘no viral DNA,’ Dr. Sin Hang Lee had discovered there were indeed fragments of HPV-11, HPV-16 and HPV-18 L1 DNA firmly attached to Merck’s proprietary aluminum adjuvant in 100% of the samples his laboratory tested.

The FDA was quick to confirm that Gardasil did indeed contain residual HPV L1 DNA fragments, but that these fragments ‘posed no health risk.’

By 2012, Dr. Lee had discovered that these HPV DNA protein fragments were not only bound to Merck’s proprietary aluminum adjuvant, but they had also adopted a non-B conformation, thereby creating a novel (new) chemical compound of unknown toxicity.

Non-B DNA conformations are known to be associated with genetic mutations connected to over 70 serious diseases in human beings including polycystic kidney disease, adrenoleukodystrophy, follicular lymphomas, and spermatogenic failure, just to name a few.

Instead of investigating any potential problems which could be caused by injections of this new chemical compound, HPV vaccine proponents and government health officials chose to try and minimize the impact Dr. Lee’s discovery might make on HPV vaccination programs around the globe. Rather than conducting legitimate studies to determine the extent of potential risks, they chose to attack the messenger.

Helen Petousis-Harris PhD, the Director of Immunisation Research and Vaccinology Immunisation Advisory Centre at The University of Auckland, provided a prime example of these tactics in a presentation she gave at a public hearing on HPV vaccine safety in February 2014.

Following are two of the ‘concerns’ regarding Dr. Lee’s research she mentioned during this presentation:

The tests used were over sensitive, increasing the risk of amplifying irrelevant (junk) DNA
No one else has replicated his findings

Both of these ‘concerns’ were put to rest via data presented by Laurent Bélec at the 9th International Congress on Autoimmunity on March 26-30, 2014 in Nice, France.