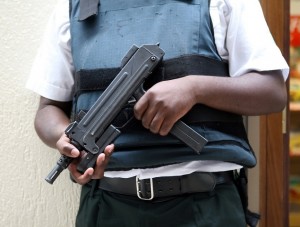 Sometimes I just have to smile when faced with anti-gun propagandists, regardless of the vicious statements they make, because I know from years of past experience in this debate that because of their deep rooted hypocrisy, they WILL inevitably make my pro-gun case for me. All I have to do is sit back and wait for them to contradict themselves…

After the Sandy Hook attacks, the NRA responded with the suggested measure of establishing armed security guards at public schools in order to ensure there is a defensive presence in place to meet any violent threat. I personally agree with the idea, though I believe it doesn’t go far enough. Frankly, allowing teachers to legally carry on school grounds would be a much more effective deterrent, promoting the ability of average citizens to protect themselves rather than constantly relying on some uniformed official.

The Obama Administration, of course, responded negatively to the NRA’s position and has yet to even address or acknowledge the idea of armed teachers. Obama shrugged off the NRA, claiming he was “skeptical” of the armed security concept, all while sending his own children to a private school protected by at least 11 armed sentries not counting Secret Service agents.

So, Obama is “skeptical” of an armed presence at your children’s school, but not his own children’s school? Yes, it’s incredibly hypocritical. My question to the president would be: If armed guards don’t make a difference, why have your children surrounded by them? I would be interested to hear his response. Perhaps he believes his children are more important than our own…