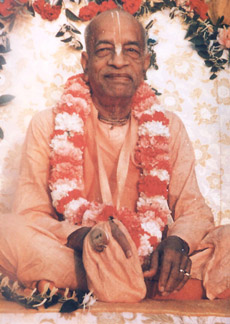 His Divine Grace A.C. Bhaktivedanta Swami Prabhupada appeared in this world in 1896 in Calcutta. His spiritual master ordered him to deliver the science of Krsna to the west in English.

In 1965 Srila Prabhupada went to the United States to fulfil the mission of his spiritual master. He wrote more than sixty volumes of authoritative translations, commentaries on the Vedic Scriptures.

The first teaching of the Bhagavad-Gita is that no one is Indian; no one is American etc.- our real self is beyond this temporary bodily designation; our permanent identity, eternal, blissful and full of knowledge, is with the Supreme Personality of Godhead as his eternal servant; beyond the material universes in the spiritual sky.

Srila Prabhupada does not encourage unrestricted sense gratification, or the belief that one is God, or that God is impersonal or void. He is passing on, the information from the Vedic literature that the Supreme Personality of Godhead is a person and that devotional service unto Him is the perfect purificatory processes.

Srila Prabhupada’s most significant contribution is his books. Highly respected by the academic community for their authoritativeness, depth, and clarity, they are used as standard textbooks in numerous college courses.

On one occasion Srila Prabhupada commented, “I may stay or go but in my books I will live forever.”

To receive a FREE Book by His Divine Grace A.C. Bhaktivedanta Swami Prabhupada please email us on rushfmstudio@gmail.com with your details.

Lister every day at 6:30am to lectures by Srila Prabhupada.

1) We Are Individuals Eternally

2) The Soul Will Not Be Killed

3) Why Lament Over Chemicals

4) Dishonor Is Worse than Death

5) Compassion On the Battlefield

7) Krishna Is Equal To Everyone