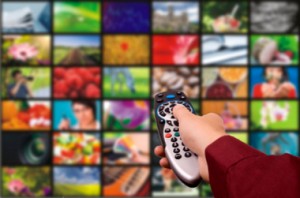 Television networks are having a busy month trying to stamp out new TV-watching technology, including telling a court that skipping a commercial while watching a recorded show is illegal. Yesterday, Fox, NBC, and CBS all sued Dish Network over its digital video recorder with automatic commercial-skipping. The same networks, plus ABC, Univision, and PBS, are gearing up for a May 30 hearing in their cases against Aereo, a New York startup bringing local broadcast TV to the Internet.