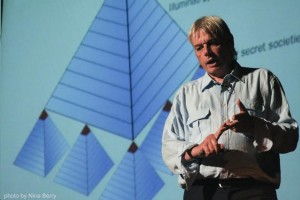 There are very few speakers who can sell out arenas around the world. Even fewer can keep the audience captivated on every word for over nine hours. The short list includes David Icke; the once-mocked alternative researcher and entertaining presenter, who recently kicked off his first speaking tour in five years.

“Since the early nineties, David Icke has made it his life’s mission to inform his readers and fans of an impending global fascist state,” says his website. “The goal all along has been to create a global Orwellian centralized dictatorship, dictating to and controlling the lives, in detail, of every man, woman and child on the planet,” he says in a video promoting his events.

Since his overarching theory that a small group of elite are manipulating world events to further their control over humanity – previously a scoffed at conspiracy theory – is now a naked reality, more people are beginning to pay attention to his work.

By writing books, recording videos and interviews, and through widely popular speaking events, Icke’s influence cannot be denied. Many long-time fans want to learn his most recent theories of how the world really works.

Alerting the masses to plans for a Third World War that will result in a singular force which will rule over all of humanity on planet earth. A New World Order that we see unfolding before our very eyes today.

2015 has been a pivotal year in geopolitical spheres as the rise of terrorist organizations threaten world peace. David Icke’s “WorldWide Wake Up” Tour could not have come at a better time!

Featuring information assimilated through 25 years of in-depth research, with over twenty bestselling books and millions of fans worldwide, events that are guaranteed to inspire genuine thought and questioning!

Long-time fans and people new to the awakening won’t want to miss Icke’s most important presentations ever.

Click on our side bar David Icke banner to ORDER TICKETS: