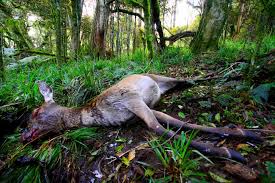 DoC owns Molesworth Station, southwest of Blenheim, and gave Ospri permission to conduct the drop as part of the national TBfree programme, aiming to eradicate bovine tuberculosis in possums by 2040.

Eight helicopters used GPS to spread 2 kilograms of 1080 per hectare.

Ospri was aware of the risk of deer “by-kill” in 1080 operations, and was aware of “informal reports” of dead deer after the October drop, the spokesman said.

Marlborough hunter Tony Orman was pleased some official numbers would be collated, having found deer killed by 1080 drops himself, though not at Molesworth Station.

“We’ve known for a long time there’s always a heavy by-kill of deer from any 1080 drop, so it was expected there would be deer killed at Molesworth. I would expect if someone is aware of 345 deer, the actual number will be much higher than that.

“I have seen deer killed by 1080 in the upper Wairau Valley and the Waihopai. You can tell it’s 1080 because they’ve obviously gone through agony, and there’s usually foam or blood coming from their mouth and nostrils.”

Orman described the use of “ecosystem poison” 1080 as “appalling”.

“At this time of year the hinds have just dropped their fawns, and they are probably only a week or two old and unable to look after themselves and will probably starve to death if they aren’t poisoned. If a farmer killed his sheep and left his lambs to die he’d be dragged into court. There’s a double standard here.”

He questioned whether possum control at Molesworth Station was even necessary.

“I believe possum numbers out there are very light. The very nature of the Molesworth terrain tells you there’s not going to be many possums out there. There’s no shelter for them.”

Ospri said “earlier surveillance” of the station showed a high density of TB-infected possums and livestock, but it decided there was no need for new surveys before the October operation.

“Although possums are the main source of wildlife infection, it is difficult and costly to directly detect TB in the possum population itself, because the disease often only occurs in small population clusters.”

Hunters have paid for scientists to fly over the site of a 1080 drop, thought to be behind hundreds of dead deer, to count carcasses.

The Marlborough branch of the New Zealand Deerstalkers Association then hired two helicopters to methodically sweep the area, having planned the survey in advance.

Branch treasurer Wayne Smith said members had been concerned about the effect of 1080 on deer for many years, reporting large numbers killed in the operations.

“As soon as we heard about the latest 1080 programme we got in touch with scientists around the country,” Smith said.

The goal of the study was to get a better idea of the numbers of deer that would likely be killed in a 1080 drop, and inform public debate, Smith said.