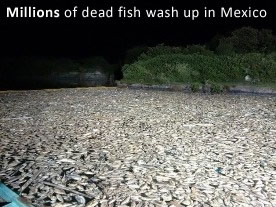 On this page you will see a list of the mass bee die offs that are happening all around the world. The bees are dying in such great numbers all over the globe that we had to start this new page to show you how perilous this situation is for the bees and for the many crops that they help to pollinate.

There also reports of 970 MILLION Monarch butterflies – a major pollinator – have been killed since 1990 in America by Monsanto’s herbicide, wiping out 90 percent of America’s total population of Monarchs.

Here is a list of worldwide mass animal deaths for 2015  (816 Known MASS Death Events in 96 Countries or Territories). There are animals dying all over the world today in huge numbers, due to the polluted state of the sea and air. Millions of Fish and massive numbers of whales and dolphins are washing ashore dead. Birds are falling dead out of the sky, and millions of poultry are dying from avian flu. The animals of the land like cattle are also dying in large numbers from disease. Although animals and fish have been dying all throughout history, we have not seen the massive consistant numbers that we are seeing today.