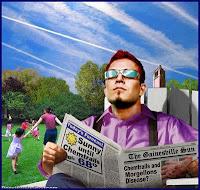 Alex Thomas for The Intel Hub

Scientists have unveiled new findings at the 111th General Meeting of the American Society for Microbiology in New Orleans that raise more questions than answers.

According to the study, bacteria has been found in the center of hailstones which suggests that these microbes play a role in not only hail storms but also other extreme weather outbreaks.

Interestingly enough, an article on The Daily Mail states that these microbes could be laboratory grown.

“Living bacteria that could be grown in the laboratory were present in the highest numbers in the inner cores of the hailstones,” reported The Daily Mail.

Is this an open admission of weather wars?
Are certain governments putting these microbes into the atmosphere to cause extreme weather in different areas throughout the world, or could this possibly be a well-placed cover for the ongoing geoengineering of the worlds atmosphere?

The large scale manipulation of our skies, through aerosol spraying, is heavily documented and has become so widely known that the powers that be are scrambling to explain away the ill effects of their worldwide “chemtrail” operations.

The Daily Mail article also states that these microbes could be affecting the way solar radiation affects the earth, which is a leading theory as to why chemtrails are being sprayed in the first place.

It seems only a matter of time before officials lay a cover story for their unlawful geoengineering activities and this may very well be that story.