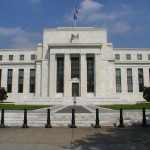 While on vacation in Hawaii, Obama nominated Jerome Powell to serve on the Federal Reserve Board of Governors.

Powel served as the undersecretary for finance under the president George H. W. Bush and was a partner of The Carlyle Group. The Carlyle Group is a massive private equity firm and one of the largest defense contractors in the world.

They’re made up of some of the most influential policymakers over the last five administrations.