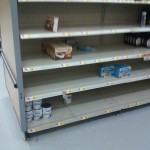 If you read any economic, financial, or political analysis for 2010 that doesn’t mention the food shortage looming next year, throw it in the trash, as it is worthless. There is overwhelming, undeniable evidence that the world will run out of food next year. When this happens, the resulting triple digit food inflation will lead panicking central banks around the world to dump their foreign reserves to appreciate their currencies and lower the cost of food imports, causing the collapse of the dollar, the treasury market, derivative markets, and the global financial system. The US will experience economic disintegration.
The 2012 Food Crisis Means Financial Armageddon

Over the last two years, the world has faced a series of unprecedented financial crises: the collapse of the housing market, the freezing of the credit markets, the failure of Wall Street brokerage firms (Bear Stearns/Lehman Brothers), the failure of Freddie Mac and Fannie Mae, the failure of AIG, Iceland’s economic collapse, the bankruptcy of the major auto manufacturers (General Motors, Ford, and Chrysler), etc… In the face of all these challenges, the demise of the dollar, derivative markets, and the modern international system of credit has been repeatedly forecasted and feared. However, all these doomsday scenarios have so far been proved false, and, despite tremendous chaos and losses, the global financial system has held together.

The 2011 Food Crisis is different. It is THE CRISIS. The one that makes all doomsday scenarios come true. The government bailouts and central bank interventions, which have held the financial world together during the last two years, will be powerless to prevent the 2012 Food Crisis from bringing the global financial system to its knees.

So far the crisis has been driven by the slow and steady increase in defaults on mortgages and other loans. This is about to change. What will drive the financial crisis in 2011 will be panic about food supplies and the dollar’s plunging value. Things will start moving fast.

Early in 2010, the supply and demand in agricultural markets went badly out of balance. The world experienced a catastrophic fall in food production as a result of the financial crisis (low commodity prices and lack of credit) and adverse weather on a global scale. Meanwhile, China and other Asian exporters, in an effort to preserve their economic growth, were unleashing domestic consumption long constrained by inflation fears, and demand for raw materials, especially food staples, exploded as Chinese consumers worked their way towards American-style over consumption, prodded on by a flood of cheap credit and easy loans from the government.

Normally food prices should have already shot higher months ago, leading to lower food consumption and bringing the global food supply/demand situation back into balance. This never happened because the United States Department of Agriculture (USDA), instead of adjusting production estimates down to reflect decreased production, adjusted estimates upwards to match increasing demand from china. In this way, the USDA has brought supply and demand back into balance (on paper) and temporarily delayed a rise in food prices by ensuring a catastrophe in 2011.

Over consumption is leading to disaster

It is absolutely key to understand that the production of agricultural goods is a fixed, once a year cycle (or twice a year in the case of double crops). The wheat, corn, soybeans and other food staples are harvested in the fall/spring and then that is it for production. It doesn’t matter how high prices go or how desperate people get, no new supply can be brought online until the next harvest at the earliest. The supply must last until the next harvest, which is why it is critical that food is correctly priced to avoid over consumption, otherwise food shortages occur.

The USDA—by manufacturing the data needed to keep supply and demand in balance—has ensured that agricultural commodities are incorrectly priced, which has lead to over consumption and has guaranteed disaster next year when supplies run out.

An astounding lack of awareness

The world is blissful unaware that the greatest economic/financial/political crisis ever is a few months away. While it is understandable that general public has no knowledge of what is headed their way, that same ignorance on the part of professional analysts, economists, and other highly paid financial “experts” is mind boggling, as it takes only the tiniest bit of research to realize something is going critically wrong in agricultural market.

All someone needs to do to know the world is headed is for food crisis is to stop reading USDA’s crop reports predicting a record soybean and corn harvests and listen to what else the USDA saying.

These designations are based on the criteria of a minimum of 30 percent loss in the value of at least one crop in the county. The chart below shows counties declared primary disaster areas by the secretary of Agriculture and the president of the United States. 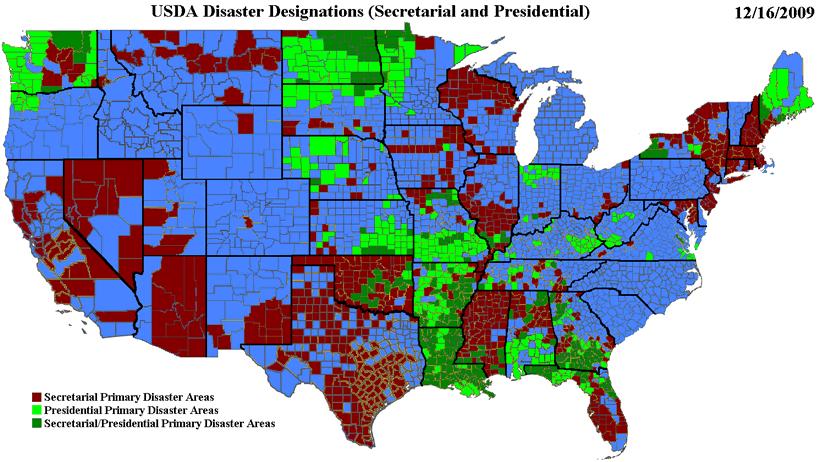 The same USDA that is predicting record harvests is also declaring disaster areas across half the Midwest because of catastrophic crop losses! To eliminate any doubt that this might be an innocent mistake, the USDA is even predicting record soybean harvests in the same states (Oklahoma, Louisiana, Arkansas, and Alabama) where it has declared virtually all counties to have experienced 30 percent production losses. It isn’t rocket scientist to realize something is horribly wrong.

The USDA is terrorized by the implications of higher food prices for the US economy, most likely because it knows the immediate consequence of sharply higher food will be the collapse of the US Treasury market and the dollar, as desperate governments and central banks dump their foreign reserves to appreciate their currencies and lower the cost of food imports. Fictitious USDA estimates should be seen as proof of the dire threat posed by higher food prices, as the USDA would not have turned its production estimates into a grotesque mockery of reality if it didn’t believe the alternative to be apocalyptic.

While the USDA may be the worst offender, the United States isn’t the only government trying to downplay the food situation out of fear. As one Indian reporter writes,governments are lying about the looming food crisis.

… some experts and governments, in full cognizance of the facts, want us not to create panic and paint a picture of parched crops and a looming food crisis. This, they say, would push up food prices unnaturally, lead to hoarding and ultimately result in a situation where many more millions across the world would go hungry. And whether it is the developing world or the developed, it is those at the bottom of the pyramid who are the most affected in such scenarios.

This leads to a confusing divide between reality and government pronouncements, or even between the perspectives of government departments

For months now, the media has been reporting two distinctly, contradicting realities. One of these realities is filled with record crops and plentiful supply, and the other is filled agricultural devastation and ruin. It has been a mad, frustrating experience to read about agricultural disasters and horrendous crop losses in virtually every state combined with predictions of a US record harvest, sometimes in the same article.

A reality of record crops and plentiful supply

The accepted, “official” reality is found in USDA crop and WASDE reports. Here, the United States Department of Agriculture is projecting the largest US soy crop on record, at 3.3 billion bushels, and the second-largest corn crop at 12.9 billion bushels.

Below are the government’s numbers for US soybean production by state. The USDA is expecting record high soybean yields across the Midwest in 2009, leading to production numbers significantly higher than the 5 year average. The large increase estimated between the August and November also indicates that the USDA doesn’t believe crops suffered much damage during the fall harvest.