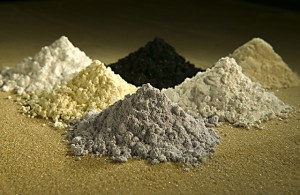 Greenland is a frontier Eldorado with untapped reserves of critical rare earths under the Arctic ice-cap but a nimble China has already stolen a march in getting access, EU industry commissioner Antonio Tajani warns.

The Italian travelled to Greenland on June 16 to initial a deal for the European Union to share exploitation rights to rare earth metal ores in return for technological and environmental mining know-how.

Buried under massive ice fields lie deposits of precious minerals and base elements needed to keep everyday modernity on the move — without them there would be no energy-efficient lightbulbs, smartphones, electric cars or wind turbines to name just a few.

The EU, the world’s biggest single market, is entirely dependent on imports for 14 out of a group of 17 minerals collectively known as “rare earths,” a closely fought over market currently dominated by China which guards these resources tightly.

“The Chinese president (Hu Jintao) arrived the next day,” Tajani told AFP in an interview. “They’re already working the ground — they bought a British company and sent in 2,000 Chinese miners.”

The unwieldy machinery of EU politics means the June deal will not be examined by ministers from its 27 member states until next month.

While still a Danish territory, Greenland negotiated an exit nearly 30 years ago from what is now the EU and despite being subject to some treaty provisions, it is almost wholly autonomous since another referendum on relations with Copenhagen in 2009.