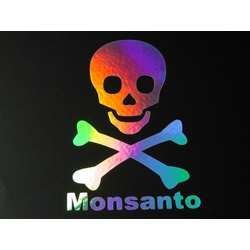 A few days ago, I reported on a recent study of Roundup, the Monsanto herbicide, and how Roundup is involved in causing gluten intolerance and celiac disease.

I emailed one of the co-authors of the study, Stephanie Seneff (MIT), and she replied. Her comments are more than interesting:

“The complex set of symptoms associated with celiac disease are not well understood. If you take the point of view that the glyphosate [the main ingredient in Roundup] causes both the celiac and all the other symptoms, then everything starts to make sense.

“Glyphosate’s disruption of CYP enzymes in the liver is a major contributor. This explains both a deficiency in activated vitamin D (epidemic in this country) and an excess of retinoic acid (leading to infertility problems and teratogenesis). It also explains impaired bile acid production and impaired ability to process fats in the gut. And it also explains system-wide sulfate deficiency which I believe is the key factor behind all modern diseases.

“We propose in the paper (based on chemistry) that glyphosate binds to the gluten in wheat and disrupts its ability to be transformed into a much less allergenic form. The body develops an allergic reaction to the strange form of gluten that it encounters (not properly formed and bound to glyphosate) developing the intolerance that characterizes gluten disease. Our proposal has not been proven — as far as I can tell, no one has done the research to show or disprove this hypothesis.

“There have also been essentially no studies to see if there is significant glyphosate residue in food, in water, in blood, in urine. These studies need to be done.

“People are mostly unaware that there has been a recent change in agricultural practices whereby wheat, sugar cane, barley, and other common crops are sprayed with glyphosate just before the harvest for desiccation/ripening. This surely means that there’s a lot more residue in the foods derived from these crops than there used to be. Furthermore, the Roundup-Ready core crops of the processed food industry – corn, soy, sugar beets, canola — have caused a massive problem with “roundup-ready” weeds, such that more and more Roundup has to be applied to get the same effect. The increased use of glyphosate on corn and soy correlates extremely well with the rise in incidence of a host of modern diseases, such as diabetes, obesity, autism, Alzheimer’s, celiac disease, irritable bowel, celiac disease, kidney cancer, kidney failure, hepatitis C, pancreatic cancer, Parkinson’s disease and thyroid cancer.”

I want to make a distinction here. Stephanie Seneff, the co-author of the study, makes a case, in her published paper, that glyphosate is the cause of gluten intolerance and celiac disease. In her subsequent email to me, she proposes an explanation for HOW this causative chain takes place, and readily admits this is a hypothesis. But her hypothesis does not diminish the strength of her published study.

Also, the use of Roundup on food crops before harvest, to “dry and ripen” them, is a vital topic. For example, I just received a note from the UK indicating that farmers use Roundup on potatoes before harvest. The Roundup goes to the tubers, which means people are eating extra herbicide.