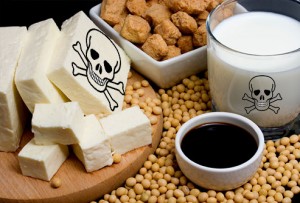 The Whole Soy Story cites a study with cheetahs at the Cincinnati Zoo that were failing to reproduce and suffering from liver disease. Part of the cause was found to be the soy-protein portion of their feed. Cheetahs fed whole carcasses of beef, chicken and other animals have no difficulty reproducing. Cats are particularly susceptible to damage from soy, since they do not have the liver enzymes to deactivate the phytoestrogens, however soy estrogens are a risk for all animals and can be compared with taking DES (a synthetic estrogen given to promote growth in animals). There are studies suggesting that soy is playing a role in the current epidemic of infertility, menstrual and other reproductive problems in humans.