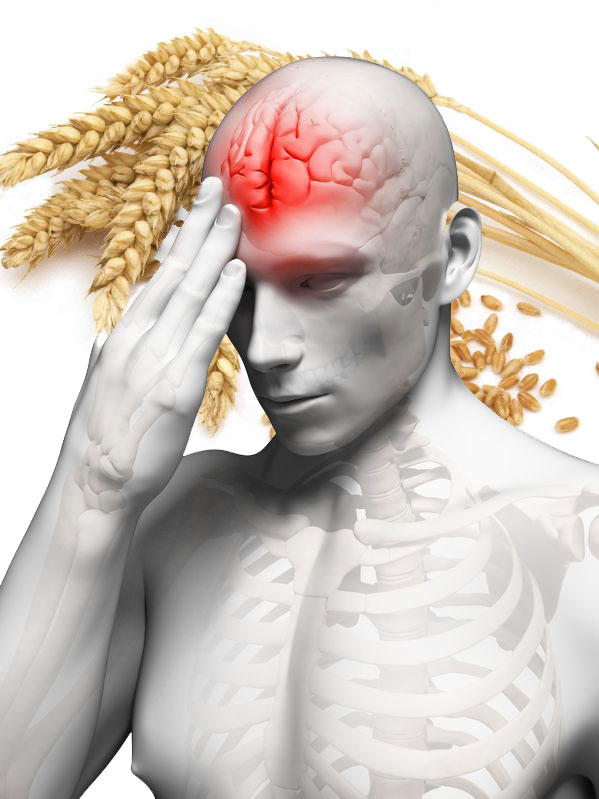 Kristen Michaelis explains this intolerance very clearly on the websiteFood Renegade:
First, let’s be clear about whatgluten intoleranceis. It isn’t a food allergy. It’s a physical condition in your gut. Basically, undigested gluten proteins (prevalent in wheat and other grains) hang out in your intestines and are treated by your body like a foreign invader, irritating your gut and flattening the microvilli along the small intestine wall. Without those microvilli, you have considerably less surface area with which to absorb the nutrients from your food. This leads sufferers to experience symptoms of malabsorption, including chronic fatigue, neurological disorders, nutrient deficiencies, anemia, nausea, skin rashes, depression, and more.

If you remove gluten from the diet, the gut heals and the myriad of symptoms disappears.
You can’t throw a shoe in the air at Whole Foods or Trader Joes without it landing on someone looking at “gluten free” products. But the question many nutrition professionals are asking is this:
Is gluten intolerance just the next fad diet or is wheat really toxic?

According to Dr. William Davis, renowned cardiologist and author of the bestselling bookWheat Belly. The synopsis of his book states:
Every day, over 200 million Americans consume food products made of wheat. As a result, over 100million of them experience some form of adverse health effect, ranging from minor rashes and high blood sugar to the unattractive stomach bulges that preventive cardiologist William Davis calls “wheat bellies.” According to Davis, that excess fat has nothing to do with gluttony, sloth, or too much butter: It’s due to the whole grain wraps we eat for lunch.

After witnessing over 2,000 patients regain their health after giving up wheat, Davis reached thedisturbing conclusion that wheat is the single largest contributor to the nationwide obesity epidemic—and its elimination is key to dramatic weight loss and optimal health. InWheat Belly, Davis exposes the harmful effects of what is actually a product of genetic tinkering and agribusiness being sold to theAmerican public as “wheat”.

The issue, according to Davis, is that what is sold as “wheat” today is far different than the grains consumed by our ancestors. It has been changed until it bears little resemblance to wheat grown a century ago. The closest wheat available to the heritage wheat is called Einkorn wheat.
Why is today’s wheat causing such problems? It’s probably no surprise that we can thank Big Biotech for this harmful genetic modification, even thoughthey’d like for you to believethey are nothing but benevolent. Melissa Melton of Truthstream Media recently wrote about the epidemic of gut inflammation:

A measly decade is not long enough for wide-scale genetic changes to take place, leaving the problem’s cause likely environmental.So what’s been going on in our environment?

Here are a few things to ponder:
In 2002,Monsanto provided its own safety evaluationto the U.S. Food and Drug Administration (FDA) that itsgenetically modified (GM) glyphosate-tolerant wheatis safe and as nutritious as conventional wheat. TheFDA, in turn, accepted this conclusion, using the apparently logic that billion-dollar companies out to make big bucks on their own science experiments that claim their products are safe because they said so is somehow a perfectly legitimate way to determine true product safety. The United States and Columbia are the only two countries that allow Monsanto’s transgenic wheat.

Aside from that, it’s worth mentioning that in just the period between 1997 to 2002 (the years GM food was really beginning to crowd our grocery store shelves), food allergies began to skyrocket. The number of people hospitalized due to allergic food reactionsrose 265 percent in that time. And food allergy figures continue to rise.

One doctor has also notedthat the wheat we are eating today is actually a genetically modified creation of the ’60s/’70s, and it contains another protein called gliadin that he refers to as the “perfect chronic poison”. Why? It binds to the brain’s opiate receptors and stimulates our appetites, causing us to eat more of it.

The “new and improved wheat” is so genetically different that it is causing health problems. Many people who go gluten-free initially feel very ill, causing them to believe that the absence of wheat means they are missing a vital nutrient. Dr Davis says that is the opposite of the truth. He writes about the chemical issues that cause the withdrawal symptoms.

Not only do people who consume wheat have to be concerned about the effects on their digestive systems, but the opioid effects of wheat consumption cause actual chemical addiction, adding to the list of reasons that many consider this to be a harmful ingredient that everyone should eliminate from their diets.

Gluten sensitivity can cause terrible issues in sufferers. Onereport links glutento a reduction of blood flow to the brain, causing issues with mental clarity and the executive functions of the brain. Melton writes of other issues from undiagnosed gluten intolerance:
Eating wheat can manifest in myriad painful ways, so most people are misdiagnosed for years with other disorders and given medications that only help them mask symptoms without ever solving the real problem.

According toGluten Free Network, these negative symptoms include:
Weight loss or gain
Nutritional deficiencies due to malabsorption (e.g. low iron levels)
Gastrointestinal problems (bloating, pain, gas, constipation, diarrhea)
Fat in stools (due to poor digestion)
Aching joints
Depression
Eczema
Headaches
Exhaustion
Irritability and behavioural changes
Infertility, irregular menstrual cycle and miscarriage
Cramps, tingling and numbness
Slow infant and child growth
Dental health decline
It’s also easy to see how people with gluten issues get misdiagnosed with everything from depression and anxiety to irritable bowel syndrome and are likely just prescribed medicines that mask part of the symptoms, and all the while their eating habits are contributing to the slow destruction of their intestinal lining and their inability to absorb nutrients properly, thus ultimately making them sicker and sicker over time.

Check out this video to seean excerpt from a 1960 U.S. Department of Agriculture short film “Miracles from Agriculture” to see how gluten was “fixed”.

The answer to this quandary? Should you jump on the gluten-free bandwagon and encourage your kids to do the same? Or is this just a marketing ploy, the next fad diet?
It’s certainly not going to hurt you to try it out. If you or a family member suffers from one or more of the issues listed above, go gluten-free for a month. Track your results and only then can you make an informed decision whether this lifestyle will be beneficial for your family.

Don’t rely on the high priced gluten free products at the health food store. Many of these are highly processed and nutritionally bereft. Instead, change your eating habits. Instead of toast of breakfast, have oatmeal. Instead of a wrap at lunch, have a salad. At dinner, instead of pasta under that delicious sauce, try rice or quinoa. Instead of trying to eat exactly the same way, just minus the gluten, replace the wheat with totally different options. This is far healthier as well as more budget-friendly.