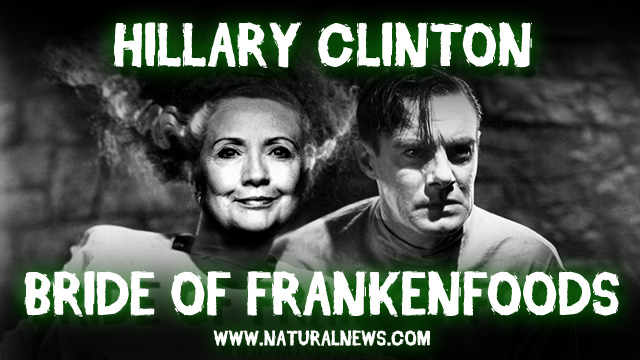 (NaturalNews) Democrats who had been programmed to blindly vote for Hillary Clinton are picking their jaws up off the floor after learning the truth about Hillary’s ties to Monsanto. The ties run so deep that she’s now being dubbed the “Bride of Frankenfood.” (Tweet this story)

Shockingly, Hillary Clinton’s ties to Monsanto are new information to her liberal support base. It drives home the important point that nearly everyone supporting Hillary Clinton has no idea who she really is, as evidenced by this stunning new video from Mark Dice and Luke Rudkowski.

“Hillary Rodham Clinton’s ties to agribusiness giant Monsanto, and her advocacy for the industry’s genetically modified crops, have environmentalists in Iowa calling her ‘Bride of Frankenfood'” reports the Washington Times. “A large faction of women voiced strong support for Mrs. Clinton’s candidacy until the GMO issue came up, prompting them to switch allegiances to Sen. Bernard Sanders of Vermont, a liberal stalwart challenging her for the Democratic nomination.”

Oh my, how little they really know about the real Hillary Clinton…

keep reading to find out more…http://www.naturalnews.com/049755_Bride_of_Frankenfood_Hillary_Clinton_Monsanto.html