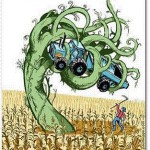 Recently the unelected potentates of the EU Commission in Brussels have sought to override what has repeatedly been shown to be the overwhelming opposition of the European Union population to the spread of Genetically Modified Organisms (GMO) in EU agriculture. EU Commission President now has a Maltese accountant as health and enviromnent Commissioner to rubber stamp the adoption of GMO. The former EU Environment Commissioner from Greece was a ferocious GMO opponent. As well, the Chinese government has indicated it may approve a variety of GMO rice. Before things get too far along, they would do well to take a closer look at the world GMO test lab, the USA. There GMO crops are anything but beneficial. Just the opposite.

What is carefully kept out of the Monsanto and other agribusiness propaganda in promoting genetically manipulated crops as an alternative to conventional is the fact that in the entire world until the present, all GMO crops have been manipulated and patented for only two things—to be resistant or “tolerant” to the patented highly toxic herbicide glyphosate chemicals that Monsanto and the others force farmers to buy as condition for buying their patented GMO seeds. The second trait is GMO seeds that have been engineered genetically to resist specific insects. Contrary to public relations myths promoted by the agribusiness giants in their own self-interest, there exists not oné single GMO seed that provides a greater harvest yield than conventional, nor one that requires less toxic chemical herbicides. That is for the simple reason there is no profit to be made in such.

As prominent GMO opponent and biologist, Dr Mae-Wan Ho of the Institute of Science in London has noted, companies such as Monsanto build into their seeds herbicide-tolerance (HT) due to glyphosate-insensitive form of the gene coding for the enzyme targeted by the herbicide. The enzyme is derived from soil bacterium Agrobacterium tumefaciens. Insect-resistance is due to one or more toxin genes derived from the soil bacterium Bt (Bacillus thuringiensis). The United States began large scale commercial planting of GMO plants, mainly soybeans and corn and cotton around 1997. By now, GM crops have taken over between 85 percent to 91 percent of the areas planted with the three major crops, soybean, corn and cotton in the US, on nearly 171 million acres.

The ecological time-bomb that came with the GMO according to Ho, is about to explode. Over several years of constant application of patented glyphosate herbicides such as Monsanto’s famous and highly Roundup, new herbicide-resistant “super-weeds” have evolved, nature’s response to man-made attempts to violate it. The super-weeds require significantly more not less herbicide to control.

ABC Television, a major US national network, made a recent documentary about the super-weeds under the rubric, “super weeds that can’t be killed.”i[1]

They interviewed farmers and scientists across Arkansas who described fields overrun with giant pigweed plants that can withstand as much glyphosate as farmers are able to spray. They interviewed one farmer who spent almost €400000 in only three months in a failed attempt to kill the new super-weeds.

The new super-weeds are so robust that harvester combines are unable to harvest the fields and hand tools break trying to cut them down. At least 400000 hectares of soybean and cotton in Arkansas alone have become invested with this new mutant biological plague. Detailed data on other agricultural regions is not available but believed similar. The pro-GMO and pro-agribusiness US Department of Agriculture has been reported lying about the true state of US crop harvest partly to hide the grim reality and to prevent an explosive revolt against GMO in the world’s largest GMO market.

One variety of super-weed, palmer pigweed can grow up to 2.4 meters high, withstands severe heat and prolonged droughts, and produces thousands of seeds with a root system that drains nutrients away from crops. If left unchecked, it takes over an entire field in a year. Some farmers have been forced to abandon their land. To date palmer pigweed infestation in GMO crop regions has been identified in addition to Arkansas, also in Georgia, South Carolina, North Carolina, Tennessee, Kentucky, New Mexico, Mississippi and most recently, Alabama and Missouri.

Weed scientists at the University of Georgia estimate that just two palmer pigweed plants in every 6 meter length of cotton row can reduce yield by at least 23 percent. A single weed plant can produce 450 000 seeds. ii[2]

Glyphosate is the most widely used herbicide in the US and the world at large. Patented and sold by Monsanto since the 1970s under the trade name Roundup, it is a mandatory component of buying GMO seeds from Monsanto. Just go to your local garden store and ask for it and read the label carefully.

As I detail in my book, Seeds of Destruction: The Hidden Agenda of Genetic Manipulation, GMO crops and patented seeds were developed in the 1970’s with significant financial support from the pro-eugenics Rockefeller Foundation, by what were essentially chemical companies—Monsanto Chemicals, DuPont and Dow Chemicals. All three were involved in the scandal of the highly toxic Agent Orange used in Vietnam, as well as Dioxin in the 1970’s, and lied to cover up the true damage to its own employees as well as to civilian and military populations exposed.

Their patented GMO seeds were seen as a clever way to force increased purchase of their agricultural chemicals such as Roundup. Farmers must sign a legal contract with Monsanto in which it stipulates that only Monsanto Roundup pesticide may be used. Farmers are thus trapped both in buying new seeds from Monsanto each harvest and buying the toxic glyphosate.

France’s University of Caen, in a team led by molecular biologist, Gilles-Eric Seralini, did a study that showed Roundup contained one specific inert ingredient, polyethoxylated tallowamine, or POEA. Seralini’s team demonstrated that POEA in Roundup was more deadly to human embryonic, placental and umbilical cord cells than even the glyphosate itself. Monsanto refuses to release details of the contents of its Roundup other than glyphosate, calling it “proprietary.” iii[3]

The Seralini study found that Roundup’s inert ingredients amplified the toxic effect on human cells—even at concentrations much more diluted than those used on farms and lawns! The French team studied multiple concentrations of Roundup, from the typical agricultural or lawn dose down to concentrations 100,000 times more dilute than the products sold on shelves. The researchers saw cell damage at all concentrations.

Glyphosate and Roundup are advertised as “less toxic to us than table salt” in a pamphlet from the Biotechnology Institute promoting GMO crops as ‘Weed Warrior.’ Thirteen years of GMO crops in the USA has increased overall pesticide use by 318 million pounds, not decreased as promised by the Four Horsemen of the GMO Apocalypse. The extra disease burden on the nation from that alone is considerable.

Nonetheless after introduction of Monsanto GMO seeds commercially in the USA, use of glyphosate has risen more than 1500% between 1994 and 2005. In the USA some 100 million pounds of glyphosate are used on lawns and farms every year, and over the last 13 years, it has been applied to more than a billion acres. When questioned, Monsanto’s technical development manager, Rick Cole, reportedly said the problems were “manageable.” He advised farmers to alternate crops and use different makes of herbicides produced by Monsanto. Monsanto is encouraging farmers to mix glyphosate with its older herbicides such as 2,4-D, banned in Sweden, Denmark and Norway for links to cancer and reproductive and neurological damage. 2,4-D is a component of Agent Orange, produced by Monsanto for use in Vietnam in the 1960s.

US Farmers turn to organics

Farmers across the United States are reported to be going back to conventional non-GMO crops instead. According to a new report from the US Department of Agriculture, retail sales of organic food went up to $21.1 billion in 2008 from $3.6 billion in 1997.iv[4] The market is so active that organic farms have struggled at times to produce sufficient supply to keep up with the rapid growth in consumer demand, leading to periodic shortages of organic products.

The new UK Conservative-Liberal coalition government is strongly backing lifting a de facto ban on GMO in that country. UK Chief Scientific Adviser, Prof. John Beddington, recently wrote an article in which he misleadingly claimed “The next decade will see the development of combinations of desirable traits and the introduction of new traits such as drought tolerance. By mid-century much more radical options involving highly polygenic traits may be feasible.” He went on to promise “cloned animals with engineered innate immunity to diseases” and more. I think we can pass that one up, thank you.

A recent study by Iowa State University and the US Department of Agriculture assessing the performance of farms during the three-year transition it takes to switch from conventional to certified organic production showed notable advantages of organic farming over GMO or even conventional non-GMO crops. In an experiment lasting four years—three years transition and first year organic—the study showed that although yields dropped initially, they equalized in the third year, and by the fourth year, the organic yields were ahead of the conventional for both soybean and corn.

As well, the International Assessment of Agricultural Knowledge, Science and Technology for Development (IAASTD) has recently been published, the result of three-year deliberation by 400 participating scientists and non-government representatives from 110 countries around the world. It came to the conclusion that small scale organic agriculture is the way ahead for coping with hunger, social inequities and environmental disasters. v[5] As Dr Ho argues, a fundamental shift in farming practice is needed urgently, before the agricultural catastrophe spreads further across Germany and the EU to the rest of the world.vi[6]

F. William Engdahl  is the author of Seeds of Destruction: The Hidden Agenda of Genetic Manipulation