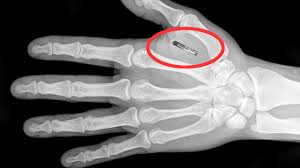 This is something we’re about to see a lot more of in the coming years.

A Belgian marketing firm called NewFusion has microchipped its staff, replacing their traditional ID cards with RFID chips implanted in their hands.

The radio-frequency identification (RFID) chips are about the same size as a grain of rice and store personal security information which can be transmitted over short distances to special receivers.

RFID chips can already be found in contactless cards, including banks cards and the Oyster system which is used by more than 10 million people to pay for public transport in London.

They are also similar to the chips implanted in pets.

In 2015, a Swedish company implanted microchips in its staff which allowed them to use the photocopier, open security doors and even pay for their lunch.

More and more companies are going to start implanting their workers with RFID chips.

At least 10,000 people worldwide have already willingly microchipped themselves, and the practice has progressed to the point that RFID chip implant kits complete with a sterile injector system can be purchased online.

Physically microchipping one’s self is already being normalized and pushed as the next technological advance for safety and security. You can already see talk of how “convenient” and “secure” chipping one’s self will be in the future because passwords and ID cards can so easily get lost, right?