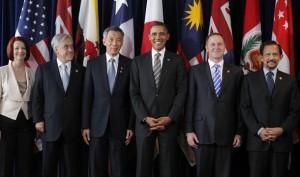 The Trans-Pacific Partnership (TPP) “is a key trade initiative” that the Obama administration claims is “seeking to support jobs for American workers by boosting American exports to the dynamic Asia-Pacific region, promote manufacturing, innovation, and entrepreneurship, and at the same time, reflect in the agreement important values on key issues such as worker rights and the environment.”

However, the agenda of the TPP is a securitization of customs and border patrol services, telecommunications, corporate competition policy that directly effects immigration, corporate investments, and the addition of intellectual property rights with focus on copyright limitations.

The TPP, held in secret, is in actuality a multi-national trade agreement that seeks to extend intellectual property rights across the globe; creating an international enforcement scheme.

In a White House statement, Obama seeks to incorporate America with Canada and the other TPP countries in a “next-generation regional agreement that liberalizes trade and investment.” The press release explains that TPP will build upon “the commitments of NAFTA.”

The TPP defines intellectual property as:

The leaked document drafted as the US TPP Intellectual Property Rights Chapter clearly states that negotiators for Obama are actively pushing for the adaptation of copyright measures that further restrict what is outlined in the Anti-Counterfeiting Trade Agreement (ACTA) and other similar international treaties.