The most merciful thing that a large family does to one of its infant members is to kill it. Margaret Sanger – Founder of Planned Parenthood. 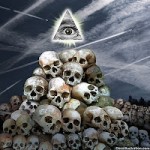 The globalists are attacking children through the genocide of abortion, often justified under the false Malthusian premise that the world is overpopulated so the human race must be culled.  For example, President Obama’s top science and technology advisor John P. Holdren co-authored a 1977 book in which he advocated the formation of a ‘planetary regime’ that would use a ‘global police force’ to enforce totalitarian measures of population control, including forced abortions, mass sterilization programs conducted via the food and water supply, as well as mandatory bodily implants that would prevent couples from having children.

Holdren’s model seems to be that of Communist China, where family planning authorities forcibly abort nine-month year-old children under a draconian one-child policy.  Said policy has resulted in a massive imbalance in the population with 40 million girls are ‘missing’ in China as a result of gender-selective abortion and infanticide.  That is, 40 million Chinese males will not find a spouse or ever start a family.

In addition to sponsoring vaccine research to reduce the population, the Bill and Melinda Gates Foundation supports the services of Planned Parenthood, which includes millions of abortions.  Bill Gates’ father even served on the board of Planned Parenthood.  In 2000, the Bill and Melinda Gates Foundation provided the International Planned Parenthood Federation (IPPF) $8.8 million. Likewise, Planed Parenthood receives financial support from the federal government, many millionaires, corporations and foundations, including the Rockefeller, Ford and Carnegie foundations and billionaire investor Warren Buffet’s foundation. Planned Parenthood performed 332,278 abortions in the United States in 2009. That is about as many as the 333,012 people who lived in the city of Cincinnati, Ohio, in 2009, according to the U.S. Census Bureau.
The Obama Administration has given its blessing to PepsiCo to continue utilizing the services of a company that produces flavor chemicals for the beverage giant using aborted human fetal tissue. The aborted fetal tissue used to make Pepsi’s flavor chemicals allegedly does not end up in the final product sold to customers.  Instead it is used to evaluate how actual human taste receptors respond to these chemical flavorings. But the fact that Pepsi uses them at all when viable, non-human alternatives are available illustrates the company’s blatant disregard for ethical and moral concerns in the matter.  Is our disregard for children and fetuses reducing us to cannibalism?

There is now no question that a massive industry exists, harvesting pieces of dead children for experiments, or transplantation into animals.  According to former abortion clinic technician Dean Alberty, clinics were harvesting eyes, brains, hearts, limbs, torsos and other body parts for sale to the scientific market: laboratories wanting to test new drugs or procedures, or researchers trying to find the causes of genetic disorders. The trafficking was taking place inside abortion clinics run by Planned Parenthood.

In America, late-term abortions are permitted, even up to 30 weeks gestation. It’s a three-day procedure and involves forcing the mother to go into labor but killing the baby with a spike to the base of the skull before it leaves the birth canal. Even so, according to Alberty, it wasn’t unusual out of the 30 or 40 late-term abortions each week to see several babies born alive on the operating table before clinicians could perform the procedure.

They were coming out alive. The doctor would either break the neck or take a pair of tongs and basically beat the fetus until it was dead.

In conclusion, the globalists have launched a multi-front war on children in an effort to reduce the population, destroy traditional virtues and the family.  This war must be exposed and ended by a massive amount of people simply refusing to participate in globalist policies.

It is time to fly out of our self-imposed prisons.