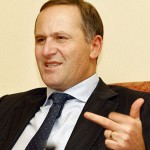 Another political mystery as a man who has spent little of his adult life in his supposed native country, suddenly surfaces and wins a national election. John Key of New Zealand appears to be the counter part to Obama’s sudden appearance in the US. I don’t believe in coincidences and the idea that yet another charismatic political figure rises up out of nowhere about the same time Obama did and suddenly is the darling of the political set in New Zealand, just as Obama was here in the US, doesn’t seem quite so coincidental to me.

This video on YouTube was released before Key won the last election. New Zealand would have done well to have paid attention to it. What is laid out in this video is your future under Key, obviously a man well connected in places other than New Zealand.