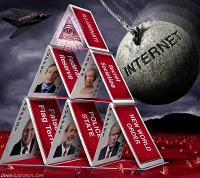 We are grateful to The Washington Post, The New York Times, Time magazine, and other great publications whose directors have attended our meetings and respected their promise of discretion for almost forty years. It would have been impossible for us to develop our plan for the world if we had been subject to the bright lights of publicity during those years. – David Rockefeller, at a 1991 Bilderberg meeting

In 2012 the New World Order will suffer major defeats to their totalitarian one world government/population reduction agenda. The defeats will not be from violent revolution, massive protests, or people continuing to beg corrupt politicians for mercy – as if 535 politicians really represent 315,000,000 people. No, the defeats will be attributed to a mass awakening and a significant portion of the population simply refusing to take actions that violate their conscience.

The elites only have two primary tools, which are well know to anyone that reads the alternative media: secrecy and deception. Their criminal enterprise will end as millions more, if not billions, awaken in 2012.

The Time is Now

Since the 1990s, researcher David Icke has been saying that there would be a point in time when the New World Order agenda is out in the open, exposed for all to see. Fortunately, that is when the agenda is most vulnerable, as many people will “wake-up” and see that humanity and their loved ones are in great danger. That time is now.