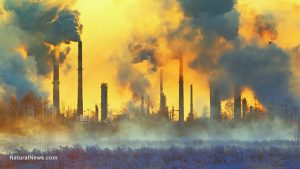 The World Health Organization has released a new report that indicates that some 92 percent of the world’s population is living in an area where air pollution exceeds the WHO’s limits. This means that the majority of people reside in a place where just breathing the air can make you sick and increase your risk of developing diseases like lung cancer and heart disease.

BBC News reports: “[The WHO] said its latest data represented the most detailed study it has ever released. The analysis combined satellite measurements and more than 3,000 monitoring stations on the ground with air transport models.”

According to the report, the Southeast Asia and Western Pacific regions account for two-thirds of such deaths, with poorer nations increasingly bearing the burden of pollution-related illness and death. Outdoor air pollution is said to be attributed to approximately 3 million deaths annually worldwide. However, if indoor air pollution is considered, up to 90 percent of global deaths can be connected to poor air quality.