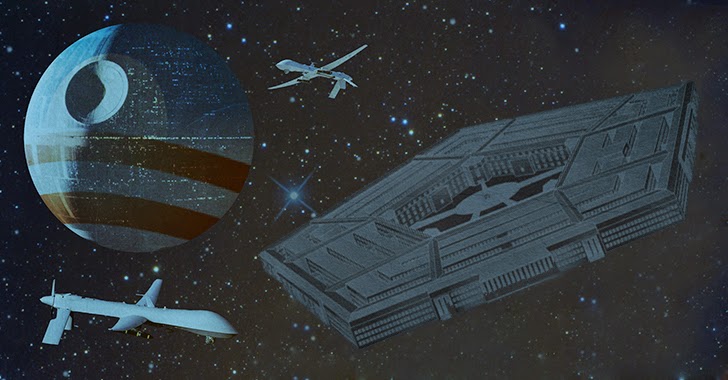 The Imperial Death Star from Star Wars and the Pentagon have much in common. It is not difficult to observe the similarities between the two behemoth structures and what they represent — especially in recent years.

For one, both used to be part of representative republics and both represent the military wings of the empires in power.

In 2007, Alternet reported that the U.S. had 737 bases, 38 of which were “major,” and that …perhaps the optimum number of major citadels and fortresses for an imperialist aspiring to dominate the world is somewhere between thirty-five and forty.

Another similarity is the desire of both the Death Star’s leaders and those at the Pentagon to weed out dissent. One of the main objectives of the dark side’s adherents is to find the rebels and eliminate them.

Though the Pentagon hasn’t quite started assassinating political dissidents (or entire planets, though Hiroshima and Nagasaki are an earthly comparison to Adleraan), it has made its views crystal clear: protesters are a form of terrorist and anyone deemed associated with terrorism may be denied his or her rights.

Still another commonality between the two ministries of war and destruction is the level of decadence afforded to the galactic and American agencies. The Death Star was a moon-sized, laser-clad behemoth for the dark side. The Pentagon employs 23,000 people in a floor space three times the size of the Empire state building and spawns doomsday technology. In both societies, the resources devoted to violence far outweigh those dedicated to promoting peace or the well-being of humanity (or alienhood).