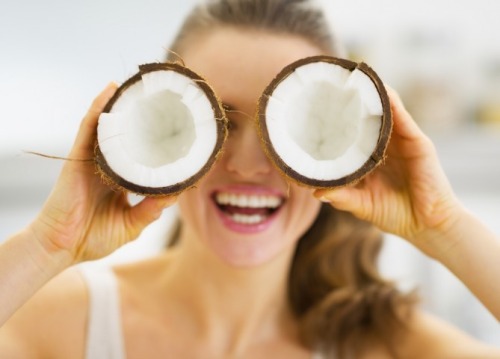 Coconut oil has made the journey from villain to victor in the health food world.

What used to be deemed an evil saturated fat, dangerous for anyone worried about heart disease and high blood pressure, has become a healing nourishing substance soaring in popularity.

How did such a drastic change come about? What made people change their minds about the numerous benefits of coconut oil?

This story is tied in with the saturated fat myth that to this day runs rampant spreading misconceptions.
Coconut Oil And The Saturated Fat Myth

The myth that saturated fats makes you fat, came about in the late 1970’s. People were led to believe from health authorities that foods high in saturated fat were to be avoided. Foods such as butter, egg yolks, animal fats and, of course, coconut oil.

The premise behind this notion is that saturated fat would raise LDL cholesterol, which in turn would clog the arteries and lead to heart diseases. Many studies were done, however they all had one fatal flaw.

The studies showing a link between saturated fats and heart disease were also grouping trans fats into the same category. Trans fats are fat molecules which have literally been transformed, such as the hydrogenation process vegetable oils undergo to become margarine.

Trans fatty acids can be linked to heart disease and other health problems, but it certainly isn’t fair to put naturally occurring saturated fats in the same category.

Since the hay day of the saturated fat myth, more and more scientific evidence is being released to prove just the opposite. Many indigenous cultures around the world value saturated fats for their nourishing properties.

The Maasai tribe in Africa drink full fat raw milk in abundance, in China women who can afford to are encouraged to eat up to 10 eggs per day.

Take a look at the Inuit of Northern Canada, they used to survive harsh winters eating mainly seal blubber and fish. Modern science is starting to see that the diets of our ancestors were far more balanced, you didn’t have any incidence of the diseases we are facing today.

Ancestral diet has a huge role to play in this, and as you can see, our ancestors weren’t afraid of a little fat.

Over 50 Coconut Oil Uses – Some Might Surprise You – http://www.greenmedinfo.com/blog/50-latest-coconut-oil-benefits-backed-science