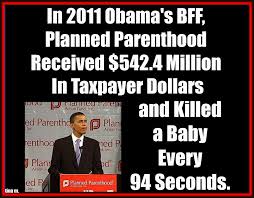 Did you know that Planned Parenthood gets more than half a billion dollars from the federal government every single year?  Did you know that the Obama administration gives an additional 35 million dollars each year to the United Nations Population Fund to promote abortion and sterilization around the globe?  And did you know that the radical new sustainable development agenda that is being launched by the United Nations inSeptember includes a goal of providing access to abortion services to every single woman on the entire planet by the year 2030?  The things that you are going to read about in this article are very disturbing.  The demonic population control agenda of the New World Order is greatly advancing, and Barack Obama and the U.S. government are at the tip of the spear.

No matter which political party has been in power, the U.S. government has been giving hundreds of millions of dollars to Planned Parenthood year in and year out.  They just kept on doing this even though they knew that Planned Parenthood was harvesting body parts from aborted babies and selling them to medical researchers to be used in sick and twisted experiments.  It was common knowledge that this was happening in the abortion industry, but nobody was really talking about it.  Thankfully, a series of undercover videos has been released recently which has caused this horrific practice to make headlines all over the planet.

Just this week, a fifth video was released.  This one actually shows a Planned Parenthood official discussing the sale of “intact fetal cadavers”…

“So, if we alter our process and we are able to obtain intact fetal cadavers, then we can make it part of the budget that any dissections are this, and splitting the specimens into different shipments is this,” she says, adding “I mean that’s — it’s all just a matter of line items.”

It is hard to even fathom that people could be so evil.  We are talking about a level of depravity along the lines of a Josef Mengele.

Now it is all out in the open, and most Americans don’t seem too concerned about it.  Barack Obama has already pledged to stop all attempts to defund Planned Parenthood, and he is very proud to stand shoulder to shoulder with them.  The following is an excerpt from a speech that Obama delivered to Planned Parenthood in 2013…

“That’s why no matter how great the challenge, no matter how fierce the opposition, there’s one thing the past few years have shown,” Obama said. “It’s that Planned Parenthood isn’t going anywhere.”

Barack Obama is also very committed to advancing the population control agenda of the United Nations.

As I mentioned above, the United Nations is launching the 2030 Agenda For Sustainable Development in September.  The Pope is actually traveling to New York to deliver the speech that will kick off the conference where this agenda will be publicly unveiled.  But what most people don’t realize is that population control is at the very core of this new agenda.  According to the finalized text of this new agenda, the UN is setting a goal of making abortion services available to every woman on the entire planet by the year 2030.  The following comes from the official text of the 2030 Agenda For Sustainable Development…

We are committed to ensuring universal access to sexual and reproductive health-care services, including for family planning, information and education.

And of course the UN has already been working hard to promote population control all over the world for many, many years.

For fiscal year 2015, the U.S. Congress approved 35 million dollars in funding for the UN population fund.  This is an organization that has been caught red-handed implementing some absolutely horrific population control measures all over the world.