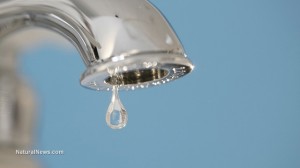 (NaturalNews) Water is essential to all life on Earth. When it comes to humans, our bodies require water for virtually every biological process needed to stay alive.

Playing a crucial part in the body’s overall digestive system, water helps to flush out your kidneys and liver, and to rid your body of any previously ingested toxins.

If water is such an essential tool in the removal of harmful substances, why would we ever want to contaminate it?

Unknown to many, most tap water has been found to contain traces of a myriad of potentially harmful toxins, including antibiotics and heavy metals. According to the Global Healing Center, “There are more than 80 ‘regulated’ contaminants and more unregulated toxins, like the rocket fuel component perchlorate which are present in most tap water.”

While some toxins are more harmful than others, arsenic, fluoride and chlorine present the greatest risk of harm for humans.

An extremely toxic heavy metal, arsenic in tap water poses grave potential health concerns. Classified as a Category I carcinogen, arsenic is almost certainly a cancer causing agent. While the EPA has set standards for arsenic levels in tap water at 10 parts per billion, several U.S. states have been known to exceed those standards from time to time.

Additionally, fluoride’s presence in most, if not all tap water, presents further negative potential health effects. One of the most toxic substances known to man, fluoride is deliberately added to tap water in the United States to help prevent tooth decay.

While no significant scientific data exists to support this claim, fluoride is still widely accepted as one of the most effective ways to inhibit the growth of cavities. Proven to be more toxic than lead, some countries around the world have caught on and banned the fluoridation process of tap water.

According to Global Healing Center, a research study conducted on the potentially harmful effects of ingesting chlorine found that rats drinking out of chlorinated water supplies developed tumors in their livers, kidneys and intestines.

Despite incontrovertible evidence detailing the negative health risks associated with consuming harmful toxins like arsenic, fluoride and chlorine, the government continues to allow their presence in most tap water.