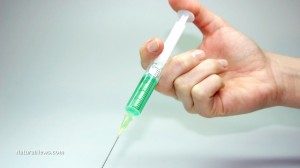 News broke earlier this week that at least 64 women experiencing adverse health effects from cervical cancer vaccines, are filing damages lawsuits against the Japanese government and the drug makers who produced the vaccines in the first place.

The average age of the women involved is 18 years old, with each receiving the vaccination between the ages of 11 and 16.

Cervical cancer vaccines have been known to cause adverse health reactions, including nerve disorders and other alarming immune reactions.

That changed in April of this year though, when the Japan Pediatric Society and other institutes recommended the issuance of the controversial vaccines, claiming “it is clear they are effective in preventing cervical cancer,” as reported by Japan Times.

Masumi Minaguchi, one of the lawyers representing the women filing the lawsuit, elaborated on his belief that the government and drug producers are responsible for the damages his clients have experienced. Claiming that the victims’ symptoms include pain all over the body, Minaguchi told Japan Times, “We aim to clarify the responsibilities of the government and the drugmakers through the lawsuits so that the victims can live without anxiety.”

This isn’t the first time people have voiced their concerns about cervical cancer vaccines. Nevertheless, the HPV vaccine – a method of treatment to prevent the contraction of the human papillomavirus, a known cause of the development of cervical cancer – has been strongly recommended by doctors across the U.S.

According to CBS News, “There’s a growing concern that more parents are stopping their children from receiving the shots because of unwarranted safety concerns.”

Between 2008 and 2010, the number of parents who refused to give their children the HPV vaccine specifically because of safety concerns nearly quadrupled, from 4.5 percent to 16 percent.

“I’m not sure what has gone into that increase,” Dr. Paul Darden, a pediatrician at the University of Oklahoma Health Sciences Center in Oklahoma City said.

Perhaps it was the 12,424 cases of adverse health reactions, resulting in 32 deaths, that were reported in June 2006, as a result of the 23 million doses that had been administered up to that date.

Whatever it is, those suffering negative side effects associated with HPV vaccinations are not happy, and are seeking retribution.