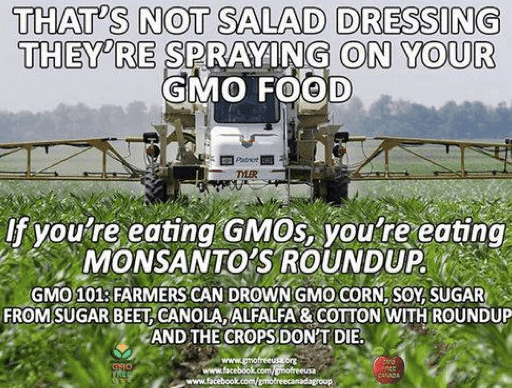 By Heidi Stevenson
Glyphosate has likely caused more damage to human health than any other chemical ever produced. Indeed, it is probably a cause of the explosion in chronic diseases. Surely civilization cannot be maintained when the average person is irrevocably ill. This trajectory of human misery must come to an end.

Roundup Ready GM crops have become the mainstay of Agribusiness. These include soy, beet sugar, and corn—which supply the bulk of the processed food industry. High fructose corn syrup, implicated in the diabetes epidemic, is produced mostly with GM corn. Cotton is genetically engineered and its oil has entered the food supply.

Glyphosate is systemic in plants, so it cannot be washed off. If it’s used on a crop, it will be in the food produced from it. All the soy, sugar, cotton, and corn that ends up in packaged foods is carrying glyphosate into our bodies.

Food and dairy animals are raised in concentrated animal feed operations (CAFOs). The bulk of their diets consists of GM grain crops. Grain and sugar crops take up higher levels of glyphosate than other crops. Therefore, the flesh, eggs, and milk of CAFO-raised animals are contaminated with glyphosate, which enters the food pipeline.

The perception that glyphosate is not toxic in humans results in difficulty obtaining figures on how much glyphosate ends up in the food supply. The United States Department of Agriculture’s (USDA’s) Pesticide Data Program is voluntary. Searching for information on residues for the year 2010, the most recent year for which data is provided, shows residue levels for all pesticides except glyphosate and another organophosphate, glufosinate. The USDA has simply not monitored residue levels for either of these herbicides, though they will this year (2013), but only for a small sampling of glyphosate residues in soy.